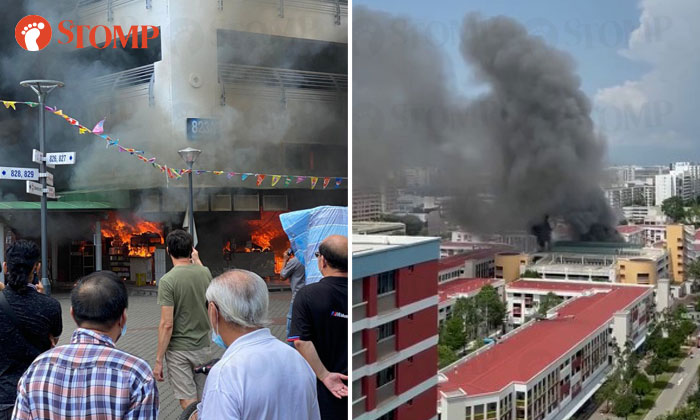 The fire is believed to have started at a fish soup stall in the coffee shop located at Block 823A Tampines Street 81.

Mr Tan Yong Seng, 50, who works at Wang's Roasted, a chicken rice stall in the coffee shop, said the fire began at about 2pm.

"The worker at the fish soup stall ran out immediately, and I tried to put out the fire with another colleague using water," he told The Straits Times in Mandarin.

"But as soon as the water touched the fire, it immediately went higher, engulfing the entire shop."

Mr Tan said the fire then spread upwards into the vents hanging above and across the entire coffee shop, which has about 15 stalls.

"I immediately shouted for everyone to run, and as we made our escape, the vents above us exploded multiple times," he said.

"The entire coffee shop was in flames within a minute. This is the first time I have come across such a fire."

Videos of the incident were shared widely on social media, and show thick plumes of smoke rising past the floors of the multi-storey carpark above the coffee shop. Other videos of the fire show debris falling from the ceiling of the coffee shop amid the flames, as loud pops are heard.

In a Facebook post, the Singapore Civil Defence Force (SCDF) said they were alerted at about 2.15pm.

"Several members of the public were trying to control the raging fire with three hose reels," said the post.

The fire was extinguished with four water jets within an hour, and damping down operations to prevent the fire from rekindling are ongoing.

Stall owners and patrons of the coffee shop, as well as members of the public in the area, had evacuated by themselves prior to SCDF arriving at the scene.

There have been no reported injuries and SCDF is investigating the cause of the fire. 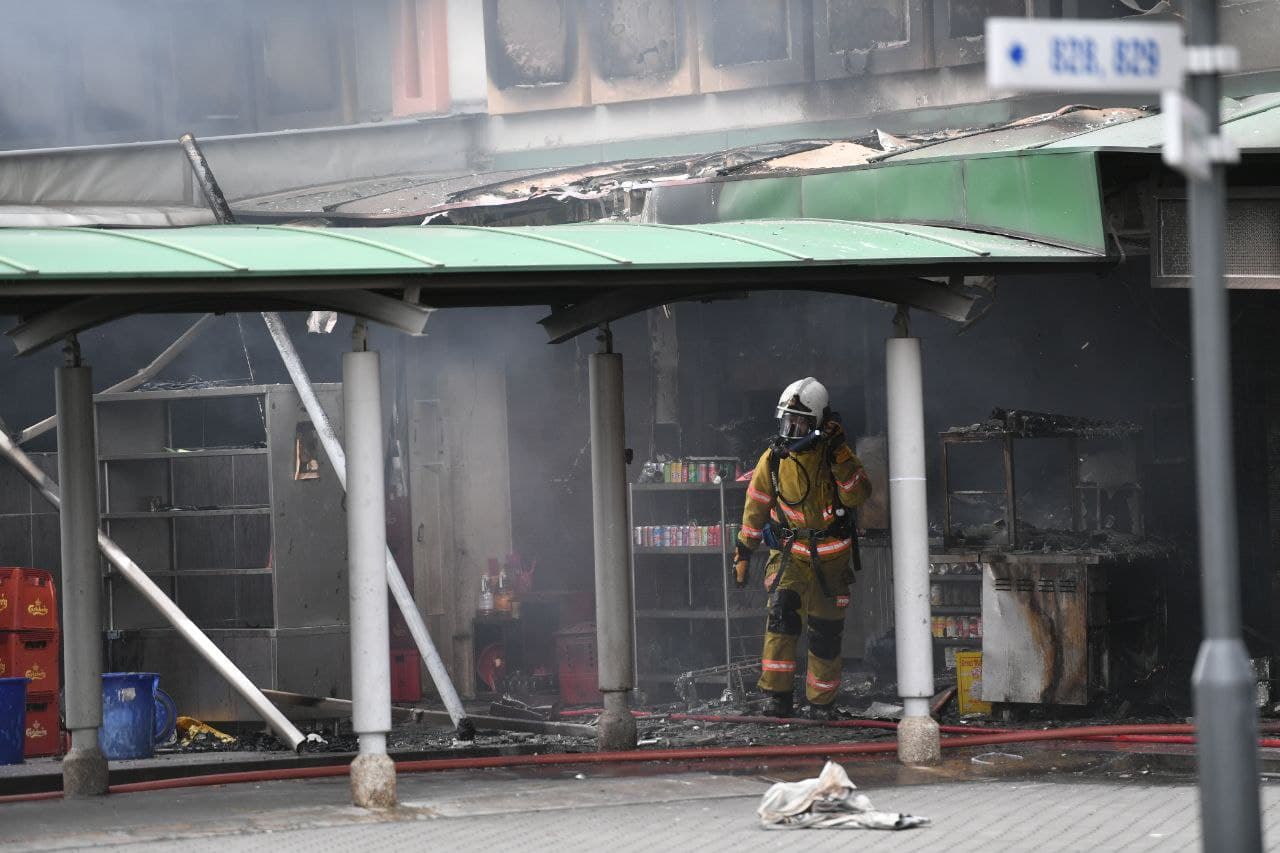 An SCDF firefighter at the coffee shop where a fire began at about 2pm on Aug 7, 2021. ST PHOTO: ARIFFIN JAMAR

Minister for Social and Family Development Masagos Zulkifli told ST that he was relieved there were no injuries and that residential units were not affected.

“The town council and HDB are working closely with SCDF to ensure the site is safe and to enable the wet market adjacent to the coffee shop to resume business tomorrow (Aug 8),” said Mr Masagos, who is MP for Tampines GRC.

“The various government agencies and the Merchant Association are working to extend help to the affected food stall operators.”

With the recently announced easing of Covid-19 measures, the coffee shop operators were preparing to welcome patrons back to dine in next Tuesday.

But Mr Tan said that because of the fire, the stallholders expect they will not be able to reopen for business for at least a month.

“Business was still quite good even with just takeaways, and everyone was looking forward to when patrons could dine in,” he said.

“It’s unfortunate that this had to happen, but there’s nothing else we can do.”

Procedures to extinguish a kitchen fire