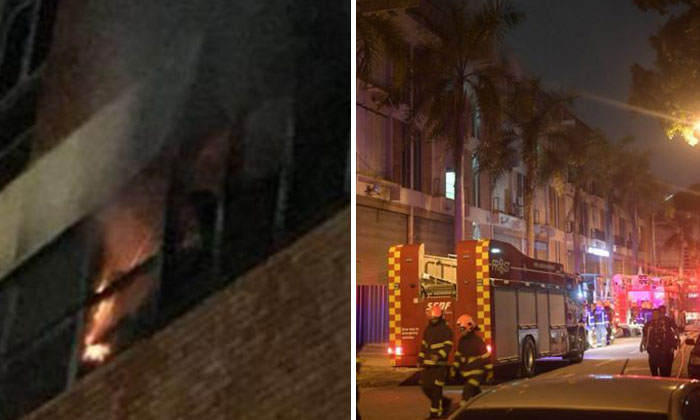 A fire broke out at a warehouse at Ubi Avenue 4 on Tuesday morning (Feb 27), and two floors containing party supplies were engulfed in flames.

In a Facebook post, the Singapore Civil Defence Force (SCDF) said that it responded to a unit fire in a light industrial building at 191, Ubi Avenue 4, at about 2am.

"Upon SCDF’s arrival, the fire had fully engulfed two storeys of the affected unit.

"Firefighters deployed two water jets as an immediate offensive firefighting tactic to control the blaze from within the building. Two additional water jets were also deployed to protect the adjacent units.”

SCDF said that the firefighters faced challenging conditions, having to traverse narrow stairways in dark and smoke-logged conditions, so they could reach the mezzanine storage platform.

The fire involved stockpiles of party supplies was put out within two hours.

During the fire, 11 workers from the unit self-evacuated before the SCDF’s arrival.

The workers were told to gather in a common area outside the warehouse, reports The Straits Times.

On it’s Facebook page, the company proclaims itself to be the sole balloon production company in Singapore and Malaysia since it was founded 18 years ago.

The boss of Bez Balloon, Mr Wu Songji, 56, told reporters that he was alerted to the fire by his employees at around 2am.

During the time of the incident, there were still some employees working overtime.

Mr Wu said that the fire disrupted the company's plans, and they would not be able to meet their deadlines.

He revealed that the first two floors were used to store supplies, while the balloon-making machines were located on the third floor.

Even though the fire has been extinguished, the likelihood of recovering the balloons and the machines intact remain low.