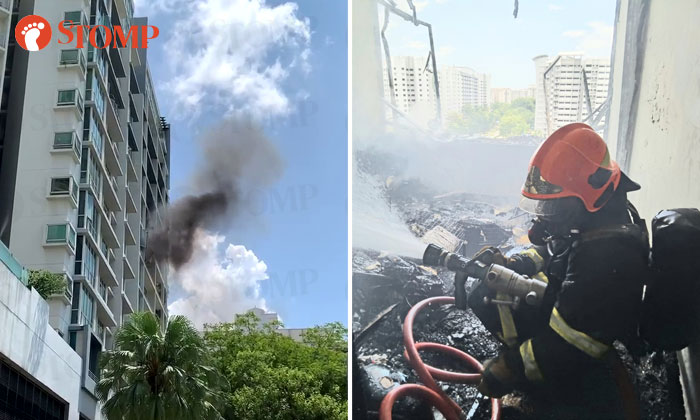 About 20 people were evacuated when a fire broke out at a condominium in Sengkang on Monday afternoon (Apr 26).

Stompers Alan and Azhar alerted Stomp to the incident at Compass Heights and shared a video of smoke coming from one of the units.

"I heard a loud explosion and noticed the unit was already on fire."

The Singapore Civil Defence Force (SCDF) said in a statement on Facebook that they were alerted to the fire at 11 Sengkang Square at about 12.05pm.

The fire involved the contents of a bedroom in a unit on the eighth floor and caused the bedroom's window panes to shatter.

"SCDF assessed two persons who were in the affected unit at the time of the fire and they did not require medical assistance.

"There were no other reported injuries.

"Police officers evacuated about 20 persons from the neighbouring units as a precautionary measure."

Related Stories
2 trapped on ledge after climbing through window to escape PAB fire in Bedok flat
25 people evacuated after fridge causes fire at Upper Serangoon Crescent condo
Members of public extinguish fire that broke out at carpark of Bank of China Building at Battery Road
More About:
fire
Sengkang
condominium