Fire breaks out in Geylang Bahru, next to Jalan Besar Town Council office 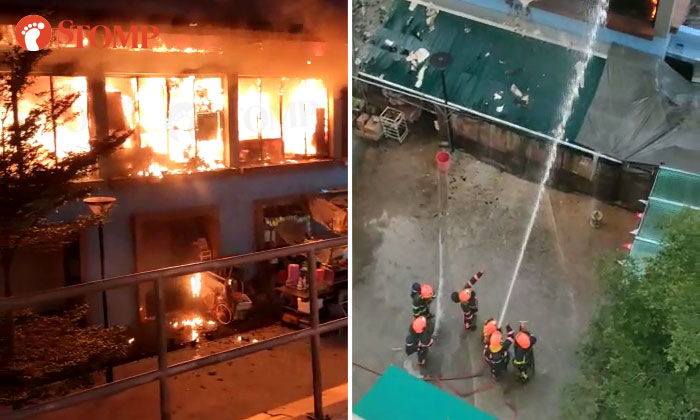 A fire broke out Geylang Bahru in the early hours of Wednesday morning (July 28).

Several Stompers alerted Stomp to the incident and shared photos and videos of a building in flames.

The affected building is next to the Jalan Besar Town Council office.

The Singapore Civil Defence Force (SCDF) said in a Facebook statement that they were alerted to the fire at 70A Geylang Bahru at 6.35am.

[Fire @ No. 70A Geylang Bahru] Earlier today at about 6.35am, SCDF was alerted to a fire at the abovementioned...

"Upon SCDF's arrival, the fire was found well-alight on the second floor of a two-storey premises," the SCDF said.

"SCDF firefighters immediately deployed water jets around the premises to contain the fire and prevent it from spreading.

"Once the fire was under control, firefighters donned breathing apparatus sets and proceeded onto the second floor to locate the seat of the fire.

"Firefighters had to exercise caution as roof tiles directly above them started collapsing."

SCDF said that they deployed a total of 11 emergency vehicles and about 40 firefighters to the site.

At the height of the operation, four water jets were deployed.

The fire involved the contents of a dance studio on the second floor of the premises and was extinguished by SCDF in about one hour.

SCDF is currently performing damping down operations and added that the Jalan Besar Town Council building at 70 Geylang Bahru is generally unaffected.