Fire breaks out in Ang Mo Kio flat: 2 residents to be lauded for firefighting, evacuation efforts 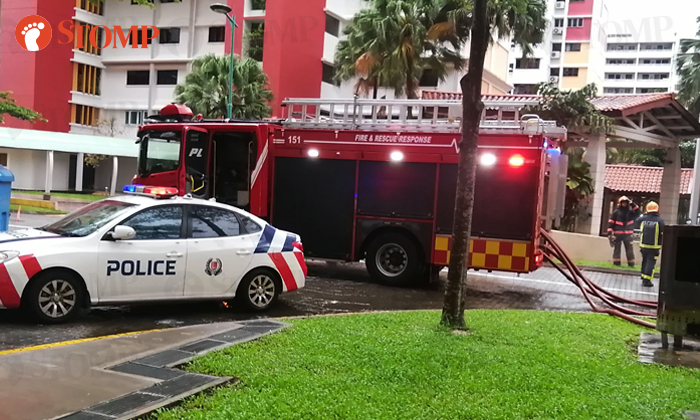 The Singapore Civil Defence Force (SCDF) told Stomp that it was alerted to the fire, which involved the contents of a living room, at around 8.30am.

Stomper Jane shared a photo of the scene and said the fire broke out in a studio unit.

She told Stomp: "Three fire engines arrived to extinguish the fire. Residents were evacuated safely and no one was injured."

SCDF said it extinguished the fire using a compressed air foam backpack and a water jet, adding: "Two occupants from the affected unit self-evacuated prior to SCDF's arrival.

"An SCDF paramedic assessed one of the occupants for smoke inhalation and the person subsequently refused conveyance to the hospital."

About 20 residents from the affected block were evacuated by the police as a precautionary measure.

SCDF said: "We understand that an occupant from the affected unit had assisted to evacuate a person. Another neighbour had assisted in firefighting and evacuation efforts.

"SCDF will be reaching out to the persons to commend them for their quick-thinking and prompt efforts."

Preliminary investigation indicates that the fire is likely to have been caused by electrical origin in the living room of the affected unit.

Members of the public are advised to adopt these good practices to prevent electrical fires from occurring:

Related Stories
Fire breaks out in living room of Marsiling Crescent flat: 'There was a lot of white smoke'
SCDF conducts forced entry into Jurong West shop to put out fire
2 taken to hospital after fire breaks out in Woodlands HDB flat, likely started by PMA battery pack
More About:
fire
kudos