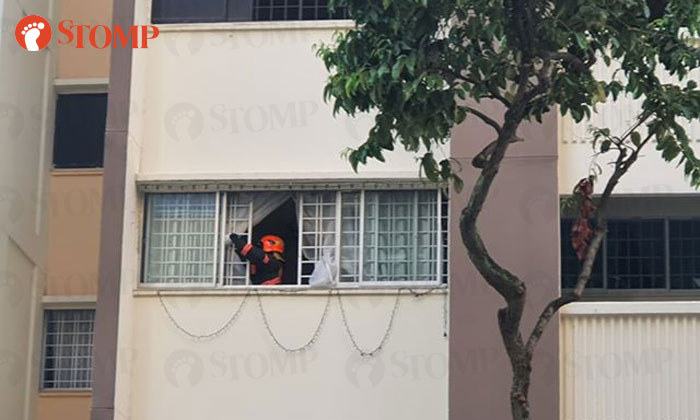 A fire broke out at a unit at Block 363 Yishun Ring Road on Sunday morning (Nov 17).

Stomper Thiruda alerted Stomp to the incident and share photos he took of Singapore Civil Defence Force (SCDF) vehicles and officers arriving at the scene.

According to Thiruda, the incident happened on the third floor of the block.

"The SCDF arrived, assessed, controlled, and left within 30 minutes," he said.

In response to a Stomp query, the SCDF said it was alerted to the incident at 7.20am.

"The fire was extinguished by the unit occupants using blankets and a domestic water hose," an SCDF spokesman said.

"Two persons were assessed by an SCDF paramedic but they subsequently refused conveyance to the hospital."

Related Stories
Fire breaks out at storage warehouse's rooftop at Kim Chuan Drive
Driver stranded for an hour after BMW he was parked next to at Pending Road bursts into flames
200 residents evacuated after fire involving discarded items breaks out in Lavender
More About:
fire
Yishun