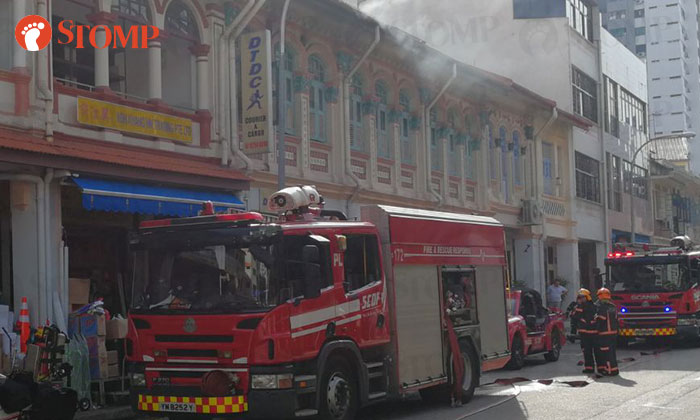 Stomper Roger was at Sam Leong Road on Wednesday morning (Jan 24), at around 9.30am when he noticed a commotion outside one of the shophouses.

He quickly took some photos and videos and sent them to Stomp.

From the photos taken, officers from the Singapore Civil Defence Force (SCDF) were spotted at the scene.

White wisps of smoke could still be seen.

The SCDF has issued an official response to the incident on their Facebook page which read:

"At 9.26am, SCDF was alerted to a fire at 32 Sam Leong Road. SCDF is at scene conducting firefighting operations."

“The fire was confined to a small area on the 2nd storey office unit of the shophouse. The fire was swiftly extinguished by SCDF firefighters with 1 water jet.

“3 persons were evacuated by Police prior to SCDF arrival. There were no reported injuries. The cause of fire is under investigation.”