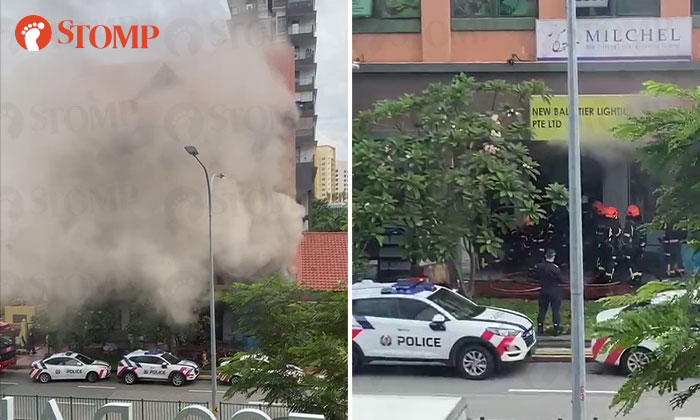 A fire broke out on the ground floor of a building in Balestier Road on Tuesday (June 28) that houses a lighting shop and a student hostel.

A Facebook post by the Singapore Civil Defence Force (SCDF) on Tuesday evening said that when firefighters arrived at the scene at 2pm, there was thick smoke coming from the lighting unit.

The post said 10 people had evacuated the building before SCDF arrived, and no injuries have been reported.

The first level is occupied by retail units, which include New Balestier Lighting and House of Tau Sar Piah, a bakery.

When The Straits Times arrived at around 4.30pm, there were at least eight firefighters spraying water into the lighting shop, and thick smoke was billowing from inside.

Smoke could also be seen coming out from the roof of the building.

Five fire engines and five police cars were at the scene, and police officers were diverting traffic on the three-lane road.

SCDF said that firefighters broke through a window of the shop and removed items to create more space to manoeuvre inside the unit.

The fire was concentrated in the back of the unit, which contained items such as fans, lights, bathroom furnishings and other home hardware fittings.

The blaze was extinguished with two water jets within two hours.

Mr Ignatius Coleman Alexander, 28, a muay thai coach at a gym across the road from the building, said he saw smoke coming out from the unit and through the roof at around 2pm.

He added: "I saw some people running out from the spa next door."

An employee who works in a nearby business said she had heard a boom coming from the shop at around 1.45pm.

She commended the firefighters from SCDF in a Facebook post on Tuesday, thanking them for their work and for putting out the blaze in two hours.