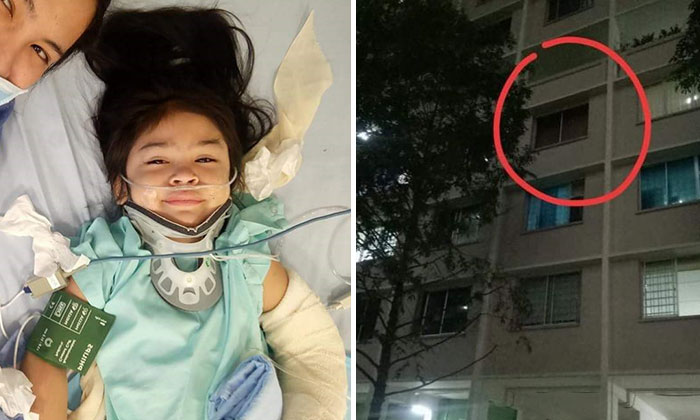 A four-year-old girl who was home by herself sustained injuries, after falling from a 4th-floor flat in Tampines last Friday (April 6).

A Singapore Civil Defence Force (SCDF) spokesman said that it responded to the accident at 9.15pm, and the girl, Sachi Santelices, was conveyed to Changi General Hospital which was on standby to receive her.

She was later transferred to KK Women's and Children's Hospital, reports The Straits Times.

Facebook user Bata Ni Susan had shared photos of the Sachi, adding that the girl "miraculously survived the... fall with no head trauma, although her spine, lungs, and liver were impacted”. She told The Straits Times that her mother and daughter had come to Singapore from the Philippines on April 1 for a vacation.

“The accident happened on April 6.

“My mother went to the market to buy food and left Sachi alone. The gate was closed and also the window.”

Ms Santelices added that her mother returned about 20 minutes later and saw police officers at the foot of the block.

“She went to our HDB flat and looked for Sachi but she's not in the apartment and the window was open.

“My mother went down nervously and checked what's happening and saw Sachi on the ground, together with the police and lots of people.”

Ms Santelices who has been working as a customer service officer in a local restaurant for nearly five months said her daughter "miraculously did not hurt her head".

The girl, however, fractured her spine and shoulder and suffered internal bleeding in both her lungs and liver. “As of today, she's fine, the internal bleeding stopped and we're just waiting for the MRI this Friday to know if she needs an operation.

“The only problem is we are in need of financial (help) to support her medical expenses.”

She revealed that her husband had boarded a flight to Singapore upon finding out about the incident, adding:

“It's an accident. No one wants this to happen, not even my mother.”

According to Lianhe Wanbao, the girl had told her family that she woke up to find the house empty.

She then opened the windows to look for her mother, which led to her fall. “Sachi is truly a miraculous girl! Thank God for giving her the chance to continue living.”

A page has been set up on crowdfunding website YouCaring.com to raise money for Sachi’s medical expenses.

Related Stories
Young girl injured in the face after scooter accident believed to have fallen by herself
Girl seriously injured, tendons severed after hands get caught in elevator door while playing
Boy on e-scooter injured after skidding on wet road at Pang Sua Park Connector
More About:
injured
fall
flat
Tampines
child