Fight or flight? It's fight for these uncles while waiting to board SQ plane at Guangzhou airport 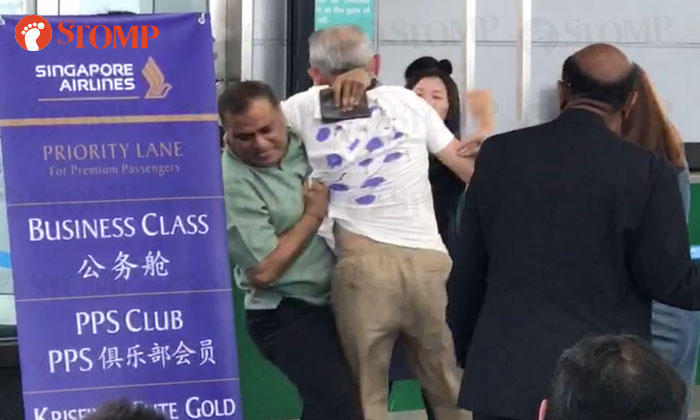 A woman, who is the colleague of the man in the green shirt, has contacted Stomp to give her side of the story,

She said her colleague was standing up for her after the older man in white had punched her in the back.

Two men got into a scuffle when one of them wanted to jump the queue before boarding Singapore Airlines flight SQ851 at Guangzhou Baiyun International Airport yesterday (Aug 30).

Stomper Cedric was waiting to board the flight from Guangzhou to Singapore when he witnessed the men arguing before getting into a fight.

"The man in the white shirt appeared to insist on being first in line when priority was being given to passengers with young children."

In a video Cedric shared with Stomp, a man in a green shirt confronted the other before things got aggressive.

Soon, they were throwing slaps and kicks at each other before the man in green threw the older man to the floor.

"Airport staff and other passengers intervened to stop the men from fighting," said Cedric.

"After that, airport security came to take the men away."