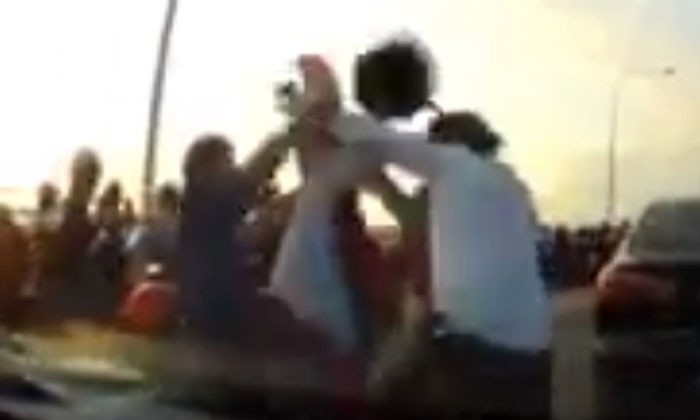 A fight involving the driver of a Singapore-registered car and a motorcyclist broke out on the Malaysia–Singapore Second Link following an accident.

Based on the timestamp of a video of the incident that was posted on Rilek1Corner, the altercation took place on Jul 5 at around 7.41am.

In the video, a stationary silver Honda can be seen just beside the motorcycle lane.

In front of the car were the driver and motorcyclist who were involved in the fight.

According to the caption on the video, the fight broke out after the driver apparently bumped into the motorcyclist by accident.

The video shows a man in a white shirt first trying to punch and grab another man holding a motorcycle helmet.

The latter responded by attempting to use his helmet to hit his attacker. At one point, the motorcyclist almost hit the head of his counterpart with the headgear.

There were two other individuals at the scene who looked like they were trying to stop the brawl. They backed off after they failed to do so.

At the end of the video, the duo were still trading blows, and moved out of the camera frame. It is unclear what happened thereafter.