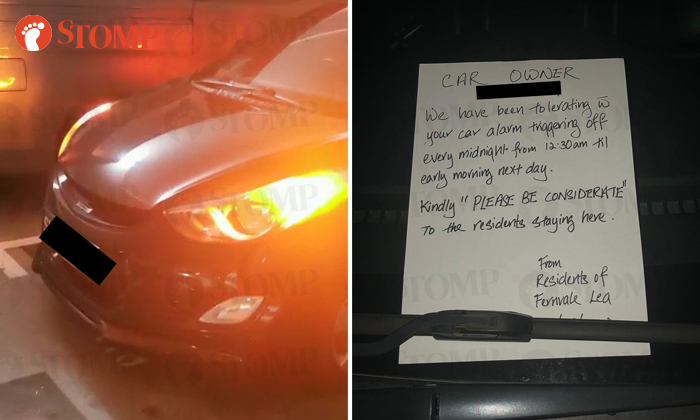 Residents have been left frustrated by a car whose alarm has been blaring non-stop in the dead of the night while parked at a multi-storey carpark at Block 468 Fernvale Link.

So much so that they collectively left a handwritten note on the black Hyundai Elantra, telling its owner to be more considerate.

Stomper D shared a video of the car alarm going off in the wee hours of Friday (Sep 11), at around 2.25am.

Irritated by the din? Well, it's the norm for residents in the vicinity, who are plagued by the noise all night.

D said that the car alarm has been going off "several times in the middle of the night every day" for "no reason", and that it has been happening "for at least four months since April 2020".

He told Stomp: "The car alarm has been blaring in the middle of night from 1.30am til 7.30am daily. This is a nightmare to us.

"It has been a nuisance and disturbance to the residents over here, and has really caused a lot of stress to a lot of us. Some of us have difficulty getting into a good night's sleep after a long day at work.

"One of my neighbours, who stays directly in front of the carpark, has been annoyed by this car for the last few months too.

"When the car alarm is triggered for no reason in the middle of the night, it scares his newborn twin daughters and wakes them up from their sleep.

"This also results the couple in having a hard time as have to pacify their newborn twin babies back into sleep and are unable to have enough sleep themselves during the night, despite having to work early the next day.

"As for myself, I am a light sleeper and the car alarm has also triggered my dog into barking. Even animals like dogs also cannot withstand such noise.

"My dog did not use to behave like this. Ever since this car alarm has been going off, my dog's behaviour changed too.

"I even brought my dog to see a vet as I thought that he might be sick. The vet asked me if there was any change in the environment that I stay in and I recalled this car alarm going off for no reason in the middle of the night.

"In the past, my dog slept in the living room but now I have to bring him to sleep with me in the bedroom. I also have to close my bedroom door and turn on the air-con to sleep every night now, unlike before.

"I suspect that the car owner is aware of this problem as from what I know from my neighbours who drive, they said that they had written a note and placed it on the car windscreen." 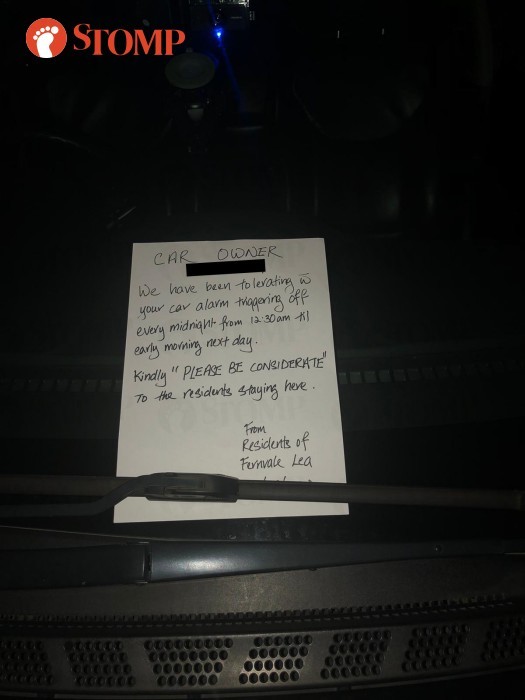 According to D, a note was left on the car at around midnight on Monday (Sep 14).

D, who used to own a car and was a car mechanic who installed sound and alarm systems for cars, speculated on what could be causing the non-stop blaring.

The Stomper shared: "Based on my experience, there could be a few reasons why the alarm keeps getting triggered:

D added: "Lately, the car driver has changed his usual parking area. In the past, the car was always parked on a lower deck but now it is in a corner lot next to a van or lorry which it can take cover from."