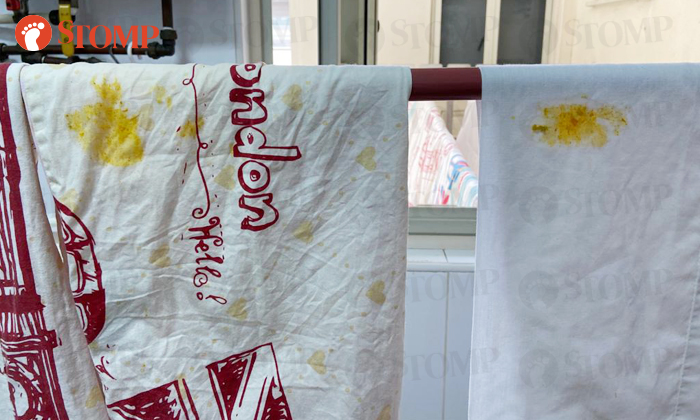 Thrilled to see good weather one fine Wednesday, a resident in Sengkang made use of the opportunity to do a big wash and hang her laundry out to dry.

However, her happiness was short-lived when she found her laundry stained with curry just as they were about to dry.

Stomper Karen, a resident at Block 406C Fernvale Road, shared photos of the incident that were taken on October 21, at around 3pm. 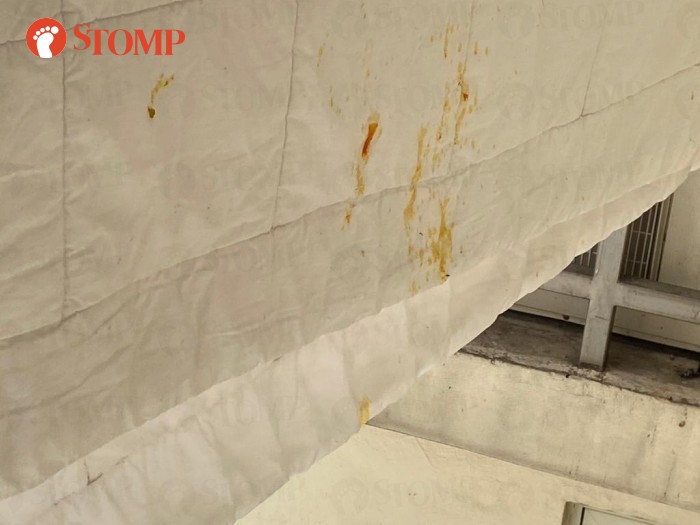 According to Karen, her neighbours on the upper floor dump food waste outside of the window "every few days" and have been doing so "for years".

Karen recounted: "I was so happy to see such good weather that morning for washing bedsheets, but ended up with nothing but frustration when they were about to dry.

"It's so sad to have such inconsiderate neighbours staying above me, who treat the kitchen window as a dustbin to just throw curry out.

"It stained all the bedding of my daughter, who had her birthday on that same day. She asked me why she met with such bad luck."

Karen lamented that further washing failed to remove the curry stains and said she had to throw all the sheets away due to hygiene concerns.

The Stomper added: "Who is going to compensate for all these?

"This is not the first time something like that has happened. Normally, I do not dare to hang my laundry out after daily washing. But for bedsheets, I have no choice."

In response to Stomp queries, a spokesman for Ang Mo Kio Town Council said it has issued an advisory to every household to educate residents on the dangers of such inconsiderate behaviour.

"Educational posters have also been displayed at the notice board of the affected block to remind residents that objects and food waste thrown out of high-rise buildings pose safety and sanitation problems," the spokesman added.

"The National Environment Agency has been informed, and we are working closely with them to monitor the situation."

Related Stories
'Nobody below my unit dries clothes outside because of Bedok North resident's dripping wet laundry'
It's always 'raining' at Geylang Bahru block -- no thanks to neighbour leaving wet laundry out
'Neighbours from the sea' hang wet laundry out to dry, drip water all over resident's clothes
More About:
neighbour
inconsiderate
litter