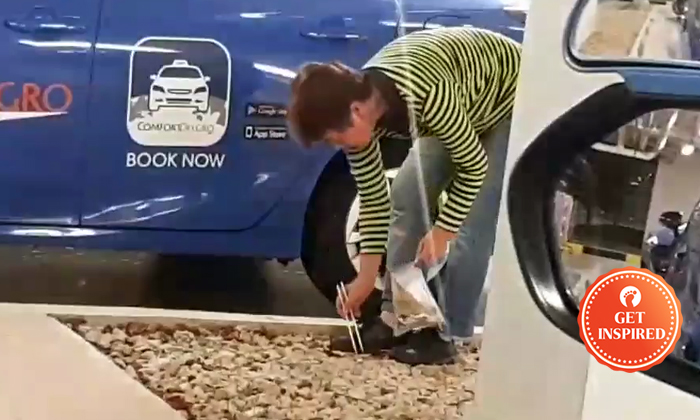 How do you pass the time when queueing up for something? For one civic-minded taxi driver, it's picking up litter.

Facebook user Wincent Chua, who posted a video of the incident, told Stomp that he witnessed the heartwarming scene at Changi Airport Terminal 4's taxi stand on Sunday (June 2), at around 1.47am.

In the 44-second clip, the female Silvercab driver can be seen using a pair of chopsticks to pick up cigarette butts and other rubbish while in the taxi queue.

She then places the trash in a plastic bag to dispose of.

Mr Chua, also a cabby, told Stomp: "The Silvercab driver did this for around 15 minutes.

"When I started recording the video, she was already on her second plastic bag.

"She moved when the queue moved. Whenever the queue stopped, she would come out of her taxi to pick up litter.

"I was very surprised and touched by her actions because the queue was very long and she could have spent the time doing her own things, like watching YouTube, but she didn't.

"She kept coming out of her taxi to pick up litter even though it wasn't her job."

Facebook page ROADS.sg shared Mr Chua's video and added: "Such civic-mindedness is rare and must be acknowledged."

Netizens were also full of praise for the female cabby and her initiative.

Stomp has contacted Premier Taxis, which operates Silvercab, for comment.