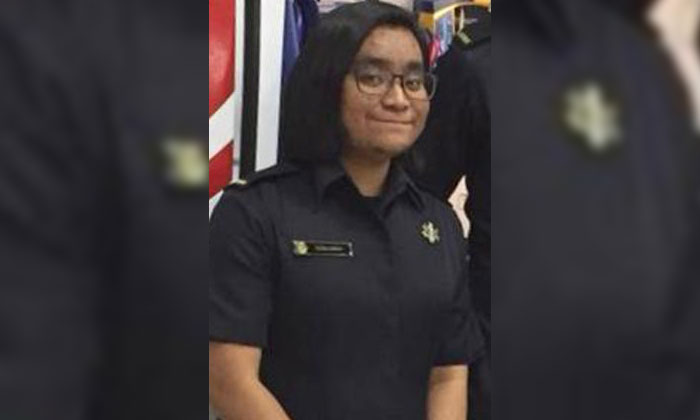 PMT Nuruljannah Binte Mohammad Razib, who was riding pillion on a motorcycle, was on the way to a work-related event with a 23-year-old SCDF full-time national serviceman (NSF) when they met with an accident along Bartley Road East towards Tampines.

Stomp was alerted to the incident after a Stomper shared a photo of a letter written by Ms Nuruljannah's father to Majlis Ugama Islam Singapura (MUIS) that had been circulating online. 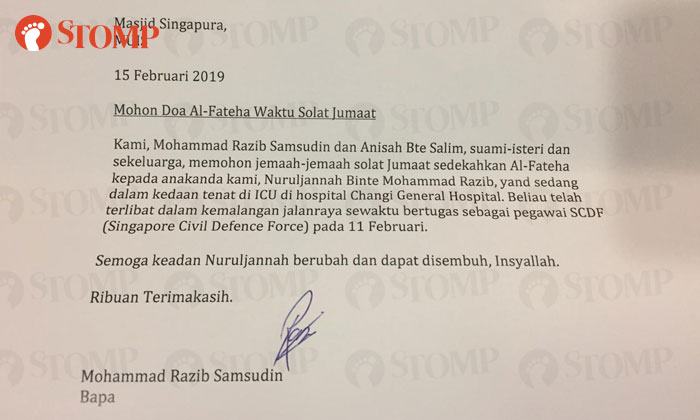 In the letter dated Feb 15, Mr Mohammad Razib Samsudin writes in Malay that his daughter is in a critical condition following a road traffic accident and is warded in the ICU at CGH.

He requests for them to pray for her during Friday prayers.

In response to a Stomp media query, SCDF provided the following statement regarding the accident:

"On the morning of 11 February, an SCDF Full-time National Serviceman (NSF) and a female paramedic trainee (PMT) (both attached to Paya Lebar Fire Station) were en route to a work-related event on a personal motorcycle when they met with an accident involving another motorcyclist.

"The accident occurred along Bartley Road East towards Tampines, near the slip road towards Kaki Bukit Avenue 4.

"All three persons were conveyed to Changi General Hospital (CGH).

"PMT Nuruljannah Binte Mohammad Razib, who was the pillion rider, sustained serious injuries and was unconscious when conveyed to CGH.

"Ms Nuruljannah is currently warded in the intensive care unit.

"The other two motorcyclists sustained injuries to their body and limbs, and were conveyed to CGH in a conscious state.

"The NSF officer was subsequently discharged on 14 February and is currently on hospitalisation leave.

"SCDF is providing all necessary assistance to the two SCDF officers and their families.

"COL Alan Toh, Commander of 2nd SCDF Division, has been in contact with the families, while a team of SCDF officers is also providing emotional support to the families and colleagues."