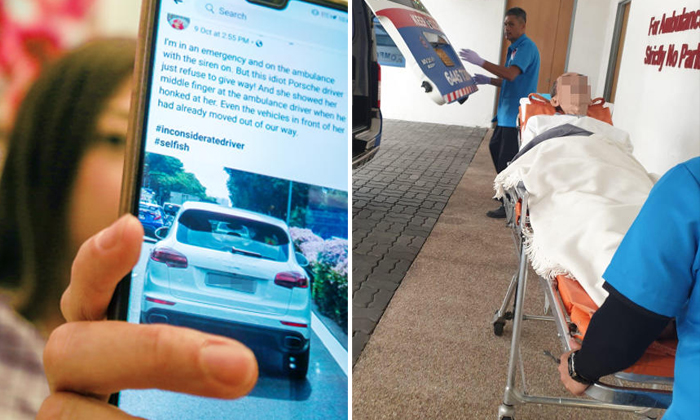 A Porsche driver has been accused of refusing to give way to an ambulance and flashing her middle finger upon getting honked at.

Facebook user Cham Ai Hui uploaded a photo of the Porsche driver and said in her post on Oct 9: "I'm in an emergency and on the ambulance with the siren on.

"But this idiot Porsche driver just refuses to give way! And she showed her middle finger at the ambulance driver when he honked at her.

"Even the vehicles in front of her had already moved out of our way."

Ms Cham, 41, said that she and her brother were informed on the afternoon of Oct 9 that doctors at Saint Andrew's had found her father unresponsive.

She told Lianhe Wanbao that her brother had initially wanted to drive their father to the hospital. However, their father became limp the moment he was moved to the car.

Realising that there must be no delay, Saint Andrew's staff immediately called for a private ambulance to transfer the patient to Singapore General Hospital.

Ms Cham recounted in an interview on Oct 12: "I sat next to the ambulance driver while a paramedic accompanied my father in the rear.

"We had been on the road for around 10 minutes when we noticed that a white Porsche in front of us was refusing to give way.

Ms Cham said that although the ambulance did not turn on its blinkers or siren, other motorists took the initiative to give way and that the journey had been smooth until they encountered the Porsche.

She added: "The ambulance first flashed its high beam as a signal, which the Porsche driver ignored.

"The ambulance then turned on its emergency lights but the latter remained unmoved, even though all the vehicles ahead of it had already given way."

According to Ms Cham, the ambulance driver was angered and asked her to use her phone to take a picture of the Porsche driver, so that he could make a report afterwards.

She said: "Seeing that the Porsche driver was still refusing to give way, the ambulance driver cut into the left lane and then overtook the Porsche."

That was when they saw the Porsche driver flashing her middle finger at them.

Ms Cham felt that the Porsche driver's actions were selfish and lacking empathy.

By sharing the incident online, she hopes to remind all road users to be considerate and take the initiative to give way should they encounter any emergency vehicles.