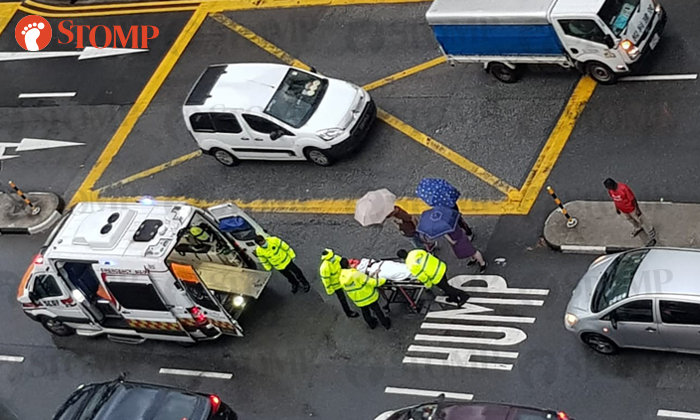 A 34-year-old woman was taken to hospital after being hit by a car along Yishun Ring Road on Wednesday (Sep 19).

Stomp understands that she suffered injuries on her right wrist and right elbow, in addition to back pains.

Stomper Bugatti, a resident in the area, said she heard a loud bang at around 5.30pm.

She told Stomp: "Afterwards, I saw that a pedestrian had gotten hit by a grey car along Yishun Ring Road, opposite the bus stop of Block 798.

"An ambulance and paramedics were seen attending to the injured woman lying on the road.

"Some passers-by helped out by using their umbrellas to shield the woman from the rain."

In response to a Stomp query, the Singapore Civil Defence Force (SCDF) said it responded to the road traffic accident at about 5.30pm.

The police told Stomp that they were alerted to an accident involving a car and a pedestrian at 5.31pm.

The pedestrian was conscious when conveyed to Khoo Teck Puat Hospital.