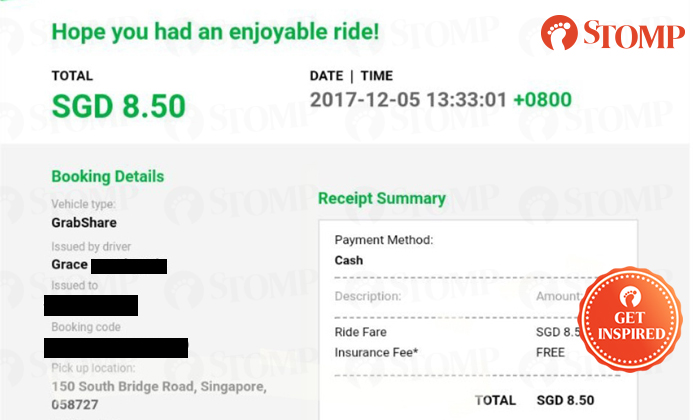 A depressed mother who had just left court is very grateful to a female Grab driver who declined payment from her and even offered her $40.

The incident happened on Dec 5, when a female Grab driver by the name of Grace picked her up at North Bridge Road.

Stomper Jaasrena reached out to Stomp to offer her sincere thanks to the driver.

She told Stomp, "I had to rush down to HDB hub at for a computer course from court for my son's sentence and was extremely depressed due to it."

Jaasrena is currently unemployed and is a single mother who has to support her 5 children, two of which are in prison.

The course that she was rushing to attend was a SkillsFuture computer course, which she hoped would make her more employable.

Even though she had no money on her, she decided to take Grab as she had planned to meet her relative at HDB Hub who would be able to pay for her ride.

The driver had asked her if she had her lunch yet, to which she replied that she had no money for lunch.

"I was sharing my life story and whatever that was happening in my life with her."

"She was very understanding and caring," added the Stomper.

When she had arrived at her destination, she was shocked when the Grab driver refused to collect the fare.

To her surprise, the driver even gave her $40 and told her to 'please buy food for you and your children'.

Touched by her kind act, Jaasrena said, "I truly never expected her to do this. I couldn't stop crying that there are such kind, loving and generous people like her in this world."

Related Stories
What's our excuse? One-legged UberEATS rider inspires Stomper
Paramedics from passing ambulance help auntie struggling to reach Boon Keng bus stop in the rain
Thank you, Grab driver for driving me to a clinic at no extra charge
More About:
grab
get inspired
kind