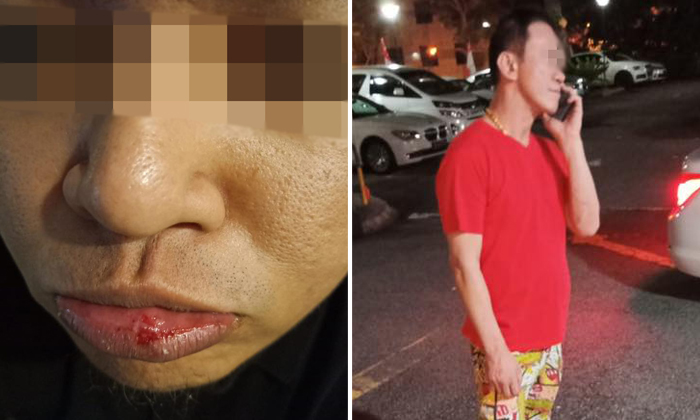 A valet driver was left injured after getting punched by a man who had engaged his services in the wee hours of Sunday (Aug 12), at around 2.45am.

The victim, 32-year-old Fairuz, told Stomp that he works full-time for Drive Home Service Singapore, which had posted about the incident on its Facebook page.

Drivers who need help getting home are able to engage the company's services through a mobile app or its hotline. The company would then assign one of its professional valet drivers to the customer.

Fairuz, who was assigned to the job, said he met with the man and his four other friends -- two males and two females -- at Q Pub in Sembawang Road.

He then took over the man's BMW, with the man in the front passenger seat while his friends sat in the backseat.

"I was instructed to drive them to Orchard Court condo at 23 Oxley Road, where his friend lived," Fairuz told Stomp.

"On the way there, I overheard the ladies rejecting the man's suggestion of going to Hotel 81 Lavender Street.

"When we arrived at Oxley Road, I waited while he was still negotiating with the ladies. After being rejected, the conversation stopped."

However, that was when things took a sour turn.

Fairuz recounted: "So I turned to him and asked, 'Sorry sir, where to next?'

"Immediately, he swung his left fist directly into my face. The force was so hard till the back of my head banged against the car door window.

"The friend quickly went home, and the ladies too left when I started bleeding from my lips."

Fairuz, who said the attack was unprovoked, added: "I dodged his other blows when I saw him drawing his fist back, and got out of the car."

After calling his boss, who advised him on what to do, Fairuz contacted the police.

Two of his colleagues subsequently arrived at the scene and helped to call the ambulance.

"I was shivering in fear and my heart pressure felt high," said Fairuz, who was conveyed to Tan Tock Seng Hospital and had to undergo an X-ray.

He added: "When I left for the hospital, the man and his friends, including the one who had initially left for the condo, were still speaking to the police.

"The man appeared unremorseful and did not apologise. Payment was also never made."

Fairuz said he was in the hospital from around 3.30am to 6am, and is currently on two days of medical leave.

A receipt that he was issued showed that his medical fees amounted to $315.94 before subsidy. The final amount payable was $120.

In its Facebook post, Drive Home Service Singapore addressed the man, saying: "[Fairuz] or any of us valet drivers don’t owe it to you when your lady friends reject your advances or when you’re in a bad mood!!

"Valet drivers are here to help ensure customers’ safe return home. We are NOT your punching bag!! So Please HAVE A LITTLE RESPECT if not any appreciation."

In response to a Stomp, query, the police confirm that a report was lodged.