Female e-bike rider, 70, taken to hospital after getting knocked down by car along Canberra Dr 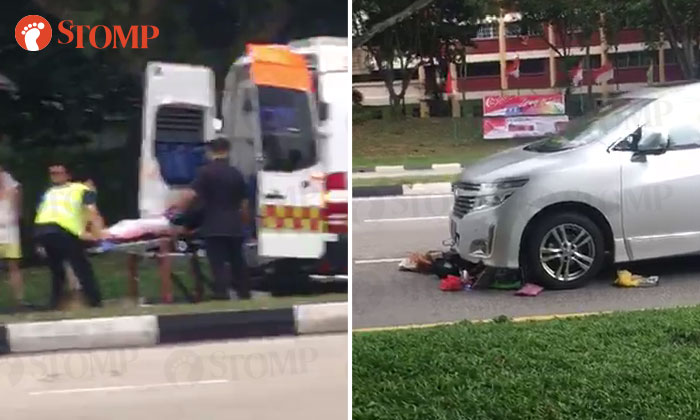 A 70-year-old woman was taken to hospital after she was hit by a car while riding her e-bike along Canberra Drive on Sunday (July 29) afternoon.

A Stomper was passing by the scene after the accident had taken place and told Stomp that he saw an e-bike trapped under the front of the silver car.

"The old lady was sitting by the side of the road next to the car," he said.

"She appeared to be in a daze."

The Stomper added that he saw the woman was wearing a helmet and that she was "bleeding on her right cheek".

"I spoke to the car driver's husband who believes that the woman was riding in the car's blind spot," said the Stomper.

"Another driver was able to capture the footage and hand over the footage for evidence to the police."

In a video the Stomper shared, the woman is later seen being wheeled into an ambulance on a stretcher.

In response to a Stomp media query, a police spokesman said that the police were alerted to an accident involving a car and an e-bike along Canberra Driver towards Yishun Avenue 7 at 4.22pm.

The spokesman said: "The e-bike rider, a 70-year-old woman was conscious when conveyed to Khoo Teck Puat Hospital."