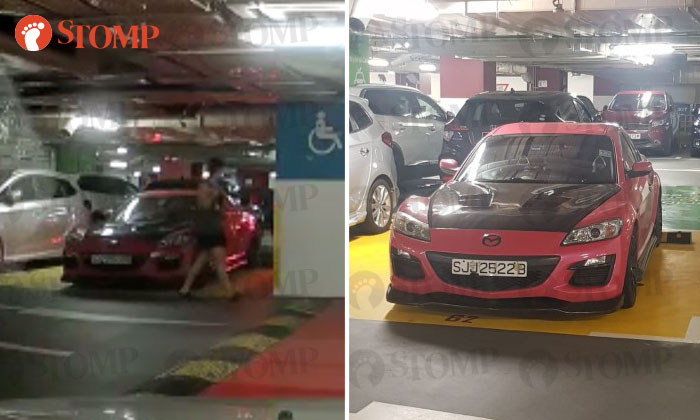 A lone female driver parked her maroon two-door car in a family lot at Jem's basement carpark yesterday (Dec 19) at about 12.52pm.

Stomper M had just parked his car at a lot opposite the family lot and was chatting with a colleague when he noticed the maroon car.

According to the Stomper, the driver of the car seemed to be looking for a lot to park in.

The Stomper said: "The family lot was occupied by another car at first, but the owner of the car came back and drove off in it.

"Then, the maroon car reversed into the lot."

The video of the incident was captured by the Stomper's in-car camera, which he sent to Stomp.

In the video, after the car reverses and parks, a lone woman emerges from it.

The Stomper, who is the father of a 16-month-old baby, told Stomp: "The woman should not have parked there.

"I was frustrated as the spot is reserved for families.

"I have a baby, but even I do not feel the need to park there.

"I think it is meant for larger families, where the parents need to manage more than one child.

"It is near the entrance so that their kids can safely walk from the car into the mall.

"I think it also for the convenience of the parents, as they might be pushing a stroller and having to manage carrying many items for their kids."

Related Stories
BMW woman parks in family lot -- but says she has 'a change of plans' when asked why she has no baby carriage
FB user says Audi driver parked in middle of road for 26 min and blocked 4 cars at Jurong East
Car parked in front of Whampoa staircase makes life hard for Stomper's 82-year-old mum
More About:
inconsiderate
inconsiderate driver
rude
parking fail