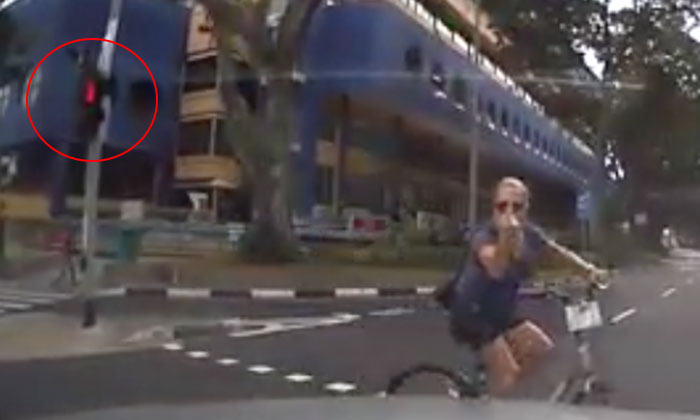 A video of a cyclist showing the finger to a motorist after she almost got into an accident beating the red light has been circulating on WhatsApp.

The incident which happened just outside Katong Shopping Centre was captured on the dashboard camera of the motorist and uploaded on the Fabrications About The PAP’s Facebook page.

In the video, the motorist is first seen behind a red car, which made a right turn from Amber Road onto Mountbatten Road.

The motorist was about to do the same, when a female cyclist suddenly rode across his path, beating the red light.

Fortunately, the motorist managed to stop his vehicle in time and avoided a collision.

The enraged cyclist also swerved sharply to the left, flashing a middle finger to the driver before riding on.

Many netizens have expressed umbrage at the unreasonable behaviour of the cyclist.

“She will not always be so lucky.”