Female cyclist, 65, in a coma after crash with PMD in Bedok North, 20-year-old rider arrested 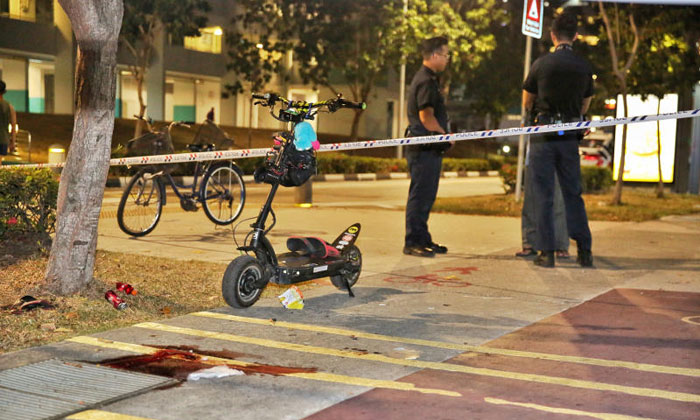 A 65-year-old woman is in a coma after her bicycle collided with an e-scooter in Bedok North on Saturday night (Sept 21).

Madam Ong Bee Eng, a logistics assistant packer, suffered a serious brain injury as well as fractures in her ribs and collar bone after she collided with the 20-year-old e-scooter rider.

Madam Ong was unconscious when she was taken to Changi General Hospital (CGH).

The police confirmed that the man, who was conscious when he was taken also to CGH, was subsequently arrested for causing grievous hurt by rash act.

The Singapore Civil Defence Force said it responded to a call for assistance at Block 539 Bedok North Street 3 at 10.24pm.

Customers watching a football match at a coffee shop at the block heard a loud bang and saw Madam Ong and the rider on the ground.

Madam Ong's son, Mr Ng Chin Khai, 41, told The Straits Times that his mother had been taken to hospital by the time he rushed to the scene.

"Doctors say she could be left in a vegetative state after her operation. We are praying that she will wake up," said Mr Ng, who is unemployed.

"My mother has been cycling around the neighbourhood for more than 10 years.

"I was told that she was about to cross a zebra crossing when the e-scooter, which was travelling very fast, hit her," he said.

Madam Ong was on her way to her home in Chai Chee Street after attending a wake when the accident occurred.

"I hope eyewitnesses will come forward and tell the police what happened," said Mr Ng.

He has not told his 88-year-old grandmother, who is believed to have suffered a stroke and is warded at the same hospital, about Madam Ong's accident.

"I am praying that my mother will wake up. She's still in critical condition," he said.

Pictures taken by Chinese-language newspaper Shin Min Daily News at the scene of the accident show bloodstains on the pavement next to the cycle path.

Police officers are seen carrying a large e-scooter believed to be involved in the accident.

According to Shin Min Daily News, the e-scooter is suspected to have been heavily modified and exceeded the weight limit.

The allowed weight limit for PMDs, bicycles and power-assisted bicycles is 20kg.

According to regulations that came into effect in 2017, these devices must also not be more than 70cm wide and must have their speed limits capped at 25kmh for them to be used on public paths.

Related Stories
Victim of e-scooter accident calls for ban of PMDs at at void decks, lift lobbies
"What are the benefits of PMDs with all these accidents?:" Stomper who nearly got hit by e-bike
Boy, 15, suffers liver injuries after accident with bus in Choa Chu Kang
More About:
PMDs
e-scooter
accident
coma
injured