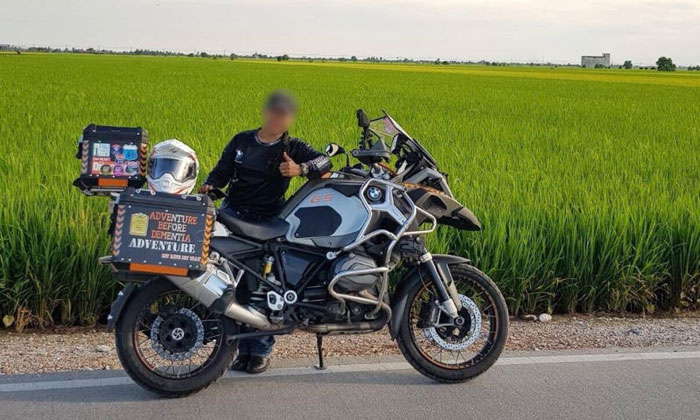 The biker wanted by the Cambodian authorities for questioning over a fatal hit-and-run accident was part of a Singapore charity convoy that visited the country, The New Paper has learnt.

Her Singapore-registered BMW R1200 GS Adventure motorcycle was allegedly involved in the Feb 7 accident in which an 81-year-old cyclist was killed.

She was part of a group of at least four bikers in Cambodia from Feb 5 to 11 after riding up to Koh Kong province as part of a "humanitarian ride" to help the elderly and less fortunate.

Ghifari Event Management, which describes itself as a group of charity volunteers that raises funds for the needy, mosques and madrasahs, had organised the Adventure Charity Ride.

Mr Razib Ibrahim, who runs the group, told TNP yesterday that two groups had gone to Cambodia as part of the charity event.

"I didn't go, but one group flew or took the bus there while another group rode their motorbikes," he said.

After the accident in the Por Senchey district in the capital Phnom Penh, the woman's motorbike was found outside the Le Grand Palais, a boutique hotel near the city's central market, TNP reported yesterday.

The damaged motorbike was missing a piece from its front, which is believed to match a piece with the BMW logo found at the accident scene.

Mr Razib said: "The biker group came back to Singapore a while ago, and its organiser told me that everything went well."

Photos of the trip were uploaded on the Ghifari Event Facebook page, including one of the woman smiling as she interacted with Cambodian children and the elderly.

She was also seen with a poster featuring photographs of the Singapore groups. Another poster listed the names of donors to the charity drive.

A video shows Cambodians thanking the Singaporeans who helped with a charity food drive for 130 of the less fortunate in the community.

When TNP told Mr Razib about the alleged hit-and-run accident, he said he was shocked as the biker group's organiser had not told him about it.

After speaking to the organiser, Mr Razib told TNP: "He said something minor had happened during the trip but not to the point of causing death.

"He assured me that the authorities were handling it and that it was a small issue. He did not want to comment further."

Adding that he was clueless as to what had happened, Mr Razib said: "I also don't know the woman, except that she is a friend of the organiser."

A check by TNP shows that the biker group organiser and the woman had deactivated their Facebook accounts.

Witnesses had said the motorcyclist involved in the accident was dressed in yellow, news site Cambodia News English (CNE) reported

Yesterday, CNE sent TNP a photo taken in Cambodia that shows the organiser and the woman wearing yellow tops with black sleeves.

TNP understands that Cambodian authorities have yet to contact its Singapore counterparts for assistance on the matter.

"My advice is to not drive or ride if you are not sure of what the traffic culture and rules are because they could be different from those here."

Seasoned long-distance biker Surinderpal Singh, 40, said that riding in Cambodia would be difficult for those unfamiliar with its traffic conditions.

"Some roads run through small towns and villages and are not sealed, and you have lots of people and traffic coming from all angles," he said.

"You have to ride with extra caution."

Related Stories
Female owner of S'pore-registered motorbike in fatal accident wanted by Cambodian police
Man looking for female driver who hit his car while overtaking him at Jalan Toa Payoh
Passenger injured after 1 car rams into another, causing it to crash through railing in hit-and-run at Bukit Timah Road
More About:
accident
hit-and-run
death
motorcyclist
Cambodia