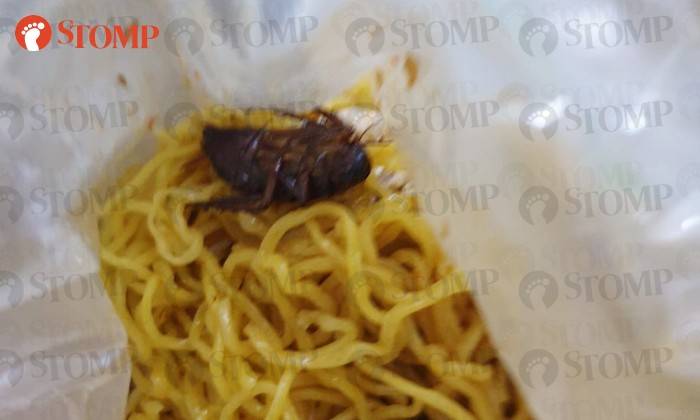 F&B operator Fei Siong Group is working closely with the authorities after a customer allegedly found a cockroach in a packet of minced meat noodles purchased from one of its stores, a spokesman told Stomp.

In an earlier report, Stomper Anonymous said he had bought bak chor mee from a Ding Ji outlet at Block 501 Jurong West Street 51 on Sunday (Aug 4), at around 3.45am.

The takeaway order was meant for his supper.

However, Anonymous said what he initially thought was a piece of mushroom in his noodles turned out to be a cockroach "with all its parts intact".

He later returned to the stall and was given a refund.

Anonymous, who posted about the incident on Facebook, told Stomp that he also made a police report but was referred to the Singapore Food Agency (SFA).

In a statement on Thursday (Aug 8), a spokesman for Fei Siong Group, which owns the Ding Ji brand, said SFA had inspected the stall in question but found no breach of hygiene standards.

"The Facebook post by Mr Thomas Tan is a picture of a pack of noodles dry (in a clear plastic bag) with a piece of blackish thing in it which he alleges is a cockroach but also resembles a piece of black mushroom, an ingredient for the noodles.

"Mr Thomas Tan has also lodged a police report on the incident and the police has also attended to his complaint at our stall.

"We would like to assure the public that we take this allegation of poor hygiene standard incident very seriously and we have been in touch with SFA once we knew about this incident.

"SFA has also conducted their inspection of the stall in question on Aug 5 at 9.40am and did not find any breach in hygiene standards of the stall.

"Fei Siong Group is working closely with SFA and the police on this matter.

"We are currently reviewing the CCTV footage to get a clearer picture of what actually happened so as to be able to proceed with further investigation."