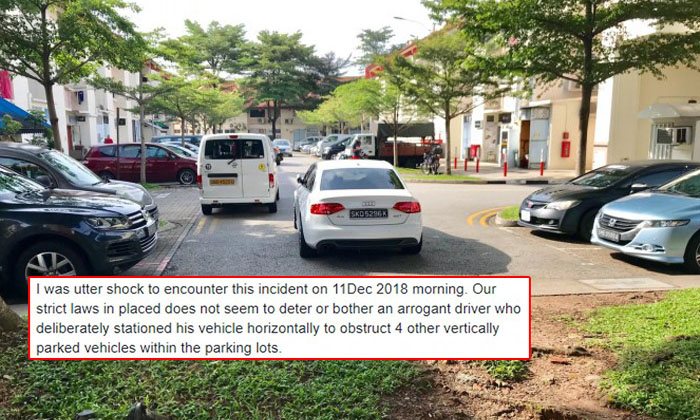 Imagine having to wait almost half an hour just to get out of a carpark.

This is exactly what happened to Facebook user Kelvin Chew who said he waited 26 minutes for an Audi driver to move his vehicle so he could exit a parking lot near Block 346 Jurong East Street 31 on Dec 11.

The driver of the white Audi had parked his car perpendicular to four vehicles, one of which was Kelvin's car.

Kelvin took pictures of the incident and posted it on Facebook. 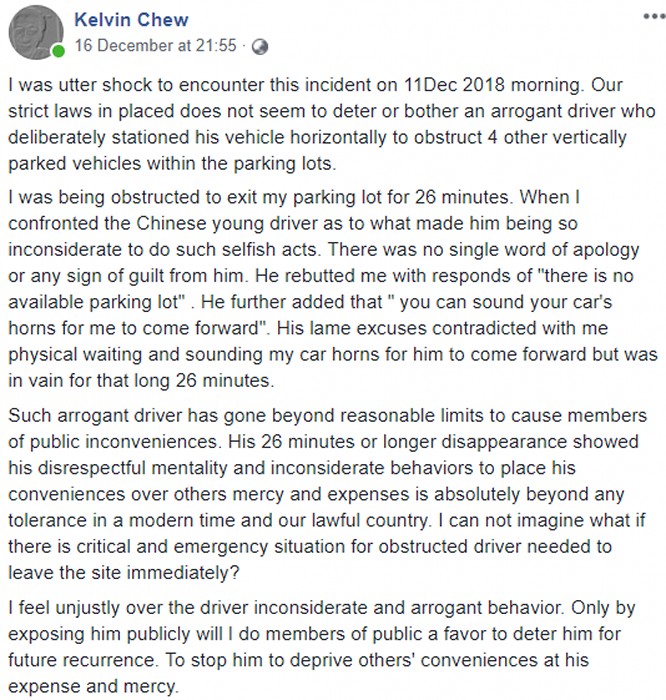 When contacted by Stomp, Kelvin said that he was having a meal at a coffee shop beside the carpark.

He said: "I had just finished breakfast and returned to my car at 9.20am when I saw the Audi.

"That's when the driver of the car appeared."

Kelvin told Stomp he approached the driver of the white vehicle to ask him why he had parked in such a manner.

He said: "The driver told me that there were no other available parking lots in the area.

"He also said that I could have sounded my horn for him to move his car.

"I had actually honked many times during the 26 minutes I waited and I believe workers at the coffee shop and a tyre store nearby heard me sounding it.

"He came up with many reasons as to why his car was parked there but did not apologise."

In the caption of his Facebook post, Kelvin wrote: "His lame excuses contradicted with me physically waiting and sounding my car horn for him to come forward."

Kelvin feels the driver was being inconsiderate and arrogant and hopes other drivers will never have to face this sort of inconvenience.

"What if the driver was facing an emergency and needed to leave the site immediately?" he added.

According to the Housing and Development Board's (HDB) website, drivers who break parking rules and park in places other than parking lots, like the Audi driver, will be fined $50.