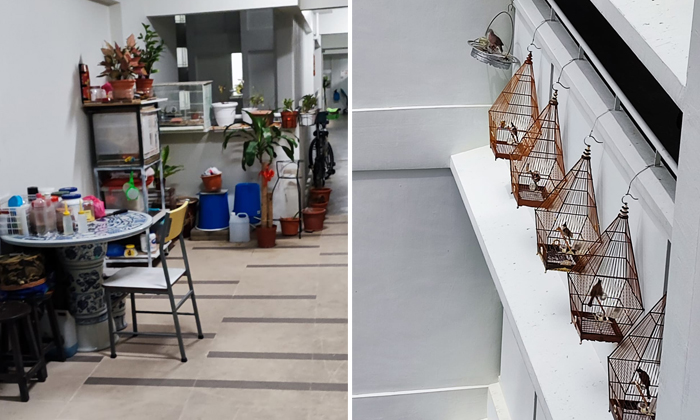 A chill-out space with furniture, a pets corner, and wakeup calls from birds at dawn — these are what you can find at a Housing Board (HDB) block in the lovely neighbourhood of Sengkang, according to one resident.

Except that he is being sarcastic.

In a post on Friday (May 6), Facebook user Dex Brown shared photos showing clutter at the common spaces on the 14th floor of Block 178C Rivervale Crescent.

He wrote in his post that has since been shared over 200 times:

This is not a complaint.

This is a compliment to Sengkang Town Council for allowing the use of common corridor.

You can install your own bird hanging wall inserts, camera, chilling out table and pets corner. I hope everyone is enjoying the 5am wake up calls from birds. free use of tap at the bin area too.

Buyer for Rivervale Crescent 178C, level 14. I welcome you to this lovely neighbourhood.

While the sarcasm was lost on some netizens, several others understood the point that Dex was making and responded in kind.

One user commented: "I love the compliments…. The words and sentences are so sweeeeeet."

Another quipped: "I love sarcasm. It’s like punching people in the face but with words."

In response to a Stomp query, a spokesman for Sengkang Town Council (SKTC) said it has "actively engaged the resident on numerous occasions pertaining to the issue of corridor obstruction" since 2021.

"Despite our repeated meetings with the owner of the bird cages/other items along the common corridor, SKTC’s efforts in mitigating the obstruction have unfortunately proven to be futile," added the spokesman.

"Although the owner of the items had attempted to remove his belongings which were placed along the common corridor, along with the bird cages at the various spots outside of his unit of residence, the issue of obstruction appears to be a recurring one."

The spokesman said SKTC is aware that the degree of obstruction created by the resident is in violation of the Singapore Civil Defence Force’s safety regulations, where a clearance width of 1.2m is required along the common corridor. This is so that rescue efforts can be carried out seamlessly in times of emergencies.

"We are also engaging with the HDB on the issue of objects placed in a hazardous manner," the spokesman told Stomp.

"The town council has and will continue to work with the relevant agencies in our continued efforts to educate the resident on the regulations requiring strict compliance, including the use of enforcement action."

View more photos of the clutter in the gallery.