FB user accuses lorry driver of being drunk and blames KPE accident on him, but netizens disagree 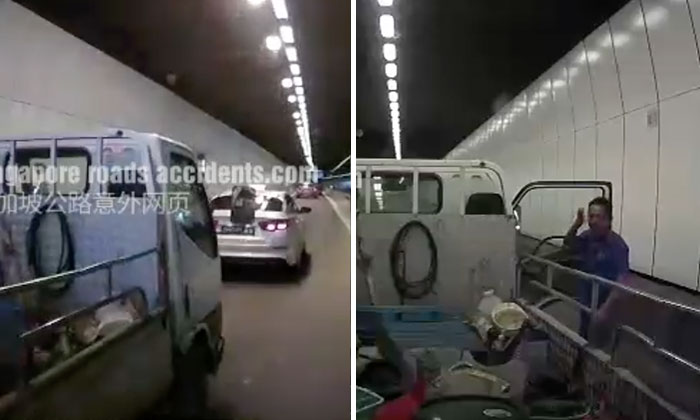 A Facebook user recently posted about a traffic accident that allegedly involved two vans and two lorries at the Kallang-Paya Lebar Expressway (KPE).

In his post, Facebook user Koh Khai Hoe also accused a lorry driver of being drunk and blamed the accident on him.

Koh posted an accompanying video of the accident which was taken on his dashboard camera, which was shared on various other pages, such as Singapore roads accident.

In the video, Koh is seen cruising along the KPE. As he approaches the tunnel, a lorry driver from the left lane attempts to overtake in the merging lane.

However, the lorry driver did not pull over.

Koh then sounds his horn repeatedly at the lorry driver and tailgates the lorry.

However, the abrupt stopping of both vehicles caused a chain collision, when motorists behind Koh were unable to react in time.

The collision caused Koh's vehicle it to surge forward and hit the lorry as well.

The lorry driver then alights and shouts at Koh, blaming Koh for not giving way to him.

However, Koh rebukes, saying that he had hit his vehicle and was running away.

The lorry driver continues shouting: "I was faster. Why didn't you stop?"

Koh explains that he would have given way.

The lorry driver seemingly ignores him and says that Koh vehicle has now hit his lorry.

The two drivers then agree to stop by the side, as motorists behind starts sounding their horns at them.

It is unclear when the incident took place.

Stomp has contacted the police for more information on the accident.

Netizens have reacted to Koh's post, with many commenting that Koh himself was also partially to be blamed for the accident.

Said a Facebook user: "The cam driver also one kind lah, during merging lane also want to force his way through... He deserves it.."