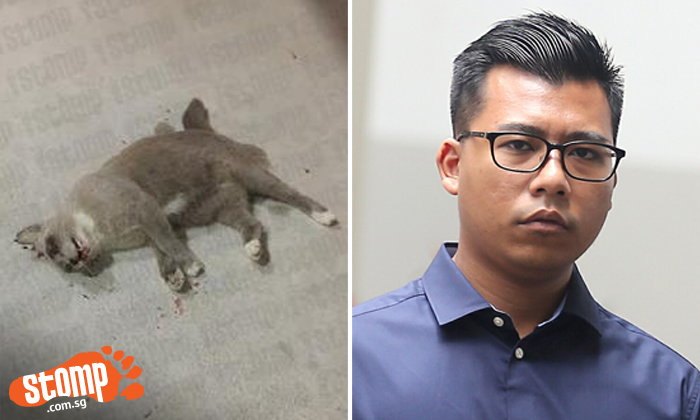 A food and beverage captain hurled a cat from a sixth-storey staircase landing after first luring it with cat food, a court heard.

In the early hours of May 26, 2016, Fajar Ashraf Fajar Ali, 25, lured the female shorthair cat into a lift at Block 884 Tampines Street 83 because he was looking for cats to play with.

He took the lift to the sixth storey and led the cat to the staircase landing where he played with it.

When the cat tried to escape, he lured it back with more food.

He then picked up the cat and dropped it over the ledge to the ground floor, said Deputy Public Prosecutor Soh Weiqi.

When he went downstairs and found the cat still alive, he picked it up and slammed it on the ground twice to ensure it died.

He only left after he was sure it was dead.

Ashraf told investigators he had committed the various acts as he was frustrated cats did not want to go near him.

A resident at Block 885 witnessed Ashraf slamming the cat to the ground twice at the void deck. She was alerted by noise coming from the opposite block at about 2.30am.

The 57-year-old woman rushed to the void deck and saw the cat lying motionless on the ground, before calling police.

Ashraf was arrested five days later after police identified him through CCTV footage.

He pleaded guilty on Monday (Feb 6) to two charges of animal cruelty.

DPP Soh called for a stiff sentence of five months' jail to be imposed on each charge, saying the manner in which Ashraf committed the acts was "reprehensible".

She said there was no indication that Ashraf had any mental problem when he committed the offences.

"In this case, he showed total disregard for an animal which was not able to protect itself," she added.

He said he had been instructed by Ashraf's parents that he was depressed in the days preceding the offence.

Sentencing was adjourned to March 6 pending an MTO suitability report.

Ashraf could be fined up to $15,000 and/or jailed for up to 18 months on each charge of ill-treating an animal.