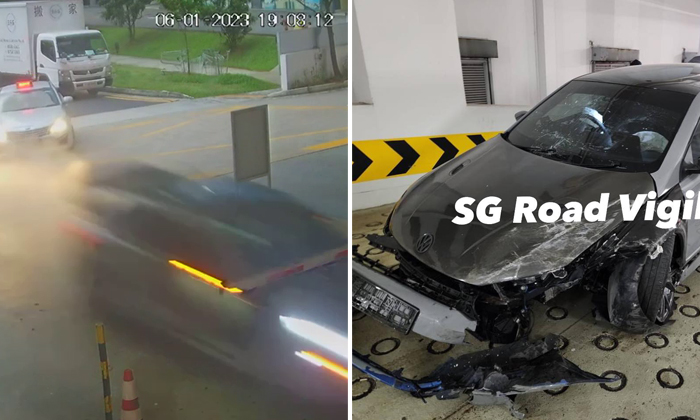 A driver crashed into a carpark in Ang Mo Kio after falling asleep at the wheel last Friday evening (Jan 6), hitting a car in the process.

CCTV footage of the incident that occurred at the Northstar @ AMK building, located in Ang Mo Kio Avenue 5, has been circulating online.

In the video, a dark-coloured Volkswagen can be seen travelling at high speed, going over a pedestrian island, narrowly missing a taxi and smashing through the gantry arm as it surges into the multi-storey carpark.

The car then struck a white car that is believed to have been exiting the carpark.

The accident drew the attention of several passers-by outside the carpark.

In photos of the accident scene posted by Facebook page SG Road Vigilante, the Volkswagen can be seen with its front bumper dislodged and getting towed away.

Stomp understands that the driver had fallen asleep at the wheel due to exhaustion. He also tested negative for alcohol.

The matter was settled privately among both drivers.

Related Stories
3 taken to hospital after van and car get into accident in Yishun
Alfa Romeo T-bones car after passing through gantry in Pasir Ris
Double-decker bus crashes into taxi, both drivers taken to hospital: Police, SBS Transit investigating
More About:
accident
viral