Father of teen cyclist who died after getting hit by car: 'The whole family's livelihood depended on her' 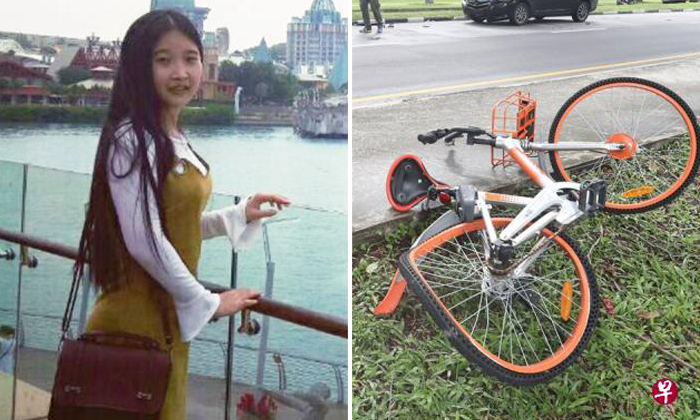 The 19-year-old Mobike rider who was hit by a car along Corporation Road had been in a coma for eight days and undergone two operations, before succumbing to her injuries.

The accident occurred at around 6.30am on March 27.

Ms Wang Yuling, who was from China, sustained head injuries and was unconscious when taken to Ng Teng Fong General Hospital.

The victim's 44-year-old father told Lianhe Wanbao that he and his wife were informed about the accident on the same day, but only arrived in Singapore on March 30 as they had to obtain a visa.

Ms Wang, who has a 13-year-old sister, had arrived in Singapore two years ago to work in an electronics company.

Her father said: "She was very filial, and started working to support the family upon completing junior high school.

"In the past year, I have been unable to work due to cirrhosis (scarring of the liver), cholecystitis (inflammation of the gallbladder), and hydronephrosis (swelling of the kidney).

"The livelihood of the whole family depended on her."

Mr Wang added that the victim earned only $1,200 per month, but led a frugal lifestyle. She scrimped and saved, and would send home any money not spent on food and lodging.

According to Mr Wang, his daughter had injuries "all over her body" and that one of her legs had its flesh exposed. She also suffered severe injuries to the brain.

"After the accident, she had two surgeries. However, the situation never improved and she never woke up," he added.