Father of NUS girl killed in Clementi crash: "I hope to see, hear and feel you soon" 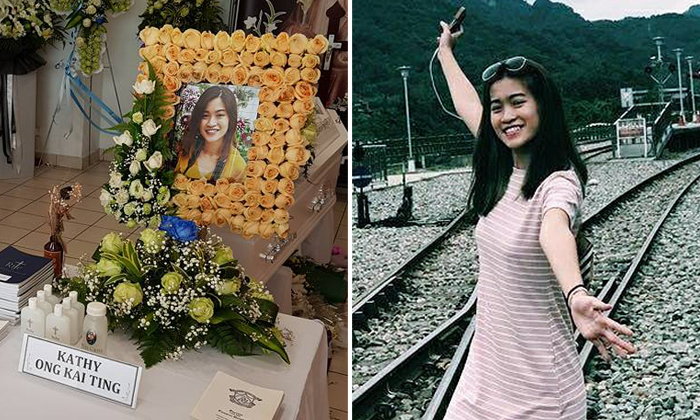 The father of 19-year-old Kathy Ong, who was killed in a car accident at Clementi on April 19, has posted a heartbreaking tribute to her on Facebook and shared how she had previously imagined her own funeral.

The accident, which involved a car and a taxi, occurred at the junction of Clementi Road and Commonwealth Avenue West.

Ms Ong, an undergraduate from the National University of Singapore (NUS), was a passenger on the taxi and had been nearly flung out of the cab. She later succumbed to her injuries.

Five others were also hurt in the accident.

In a Facebook post yesterday, Ms Ong's father shared how the deceased had 'written about her own death'.

Initially finding it "weird" and "inauspicious', Mr Ong wrote that he is now thankful that she did so as "it's the closest I can get to hearing you cos I never had the chance to have a last word with you".

The post has since garnered over 12,000 likes and over 6,500 shares, with many netizens leaving messages of condolences.

Mr Ong also shared a photo showing how his daughter had imagined and penned down a description of her own funeral.

Today is my funeral. A water hyacinth woven coffin (they’re sustainable and biodegradable — I hurt the environment enough while alive) lies in the centre, at the front of a white, glassy wall. There are carefully arranged flowers colouring the place, a warmer, softer hue from good-willed acquaintances of the bereaved, my loved ones.

People talk in hushed, respectful, comforting voices, conscious of my absence, but they will come to terms with this funeral and relax in abit, and normal conversation will resume in the presence of others they might not have seen in awhile. A funeral serves as a rather efficient gathering. My parents stand close by; they are my biggest sorrow, but I will not get to that. Time is merciless, they think, not at all fair, let alone too fair the way their daughter had lamented, because how could enough be given to them yet so little to their only child, such that they lived to watch her die? If one, however were to believe in destiny, that one’s entitled time was predetermined from the beginning, then maybe there is fairness in that every moment of time felt longer to me than it did for them, or some other reasons related to perception of time.

Everything in this hall has a time limit — the blooming of the flowers, my physical body, people’s presence, and their memory of me. But, me, I am no longer bound by time. Now isolated from the rest of my community, does time still have a purpose for me? From this point on, whether or not I do not know, but I know not time the way I used to before.

I had to take a break before writing this part; though short, writing my own funeral was quite an out-of-body experience, emotionally rather draining. There were a lot of pauses before I wrote, a lot of images in my head, such that those short paragraphs — now that I look at the clock — took me 2 hours to write. And I’ve missed my friend’s request for lunch.”