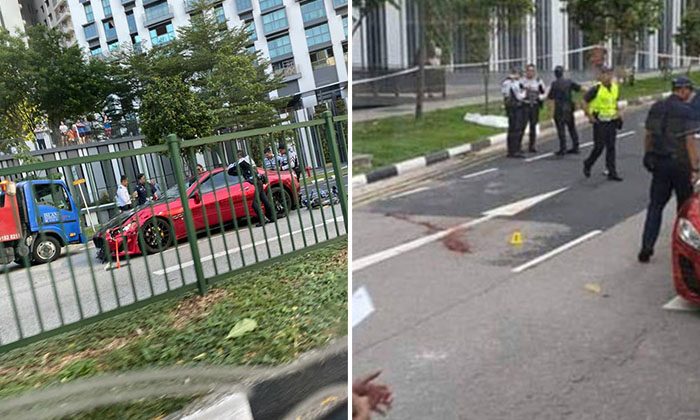 A motorist who allegedly drove off after running over a woman in Cantonment Road was arrested five days after the fatal accident last Sunday (Jan 5).

The 44-year-old driver had left the scene before the police arrived and was arrested on Friday for failing to render assistance, the police said.

She is the second person arrested in relation to the accident which took 69-year-old Madam Ong Soh Boey's life.

A 25-year-old Maserati driver, whose car was on the wrong side of the road, was arrested for dangerous driving causing death after the accident last Sunday.

A video clip of the accident soon circulated online showing that a second, yellow car was also involved. Madam Ong, who was lying on the road, was hit again and dragged several metres in the second collision involving the yellow car.

The police said they were alerted to the accident along Cantonment Road, towards Keppel Road, at about 5.50am last Sunday.

Madam Ong, who was riding an electric bicycle, was pronounced dead at scene by a paramedic.

Madam Ong, a single mother of two daughters, was riding her e-bike near Pinnacle@ Duxton when she met with the accident.

Her family on Monday told The Straits Times that she was then on her way to the provision shop she runs in Chinatown.

Despite being financially stable, she had taken on several part-time jobs, including cleaning and washing laundry, to fill her time. Her family said Madam Ong, who reportedly split with her husband nearly 40 years ago, had been riding a bicycle between home and work almost every day for 30 years without incident.

"My aunt was a strong and independent woman. She was also kind and thrifty, but generous to others," said Madam Ong's niece, who declined to be named.

She said the family intends to pursue legal action against the two drivers.