Fatal Lucky Plaza crash: 2 of the victims were sisters, all 6 were good friends 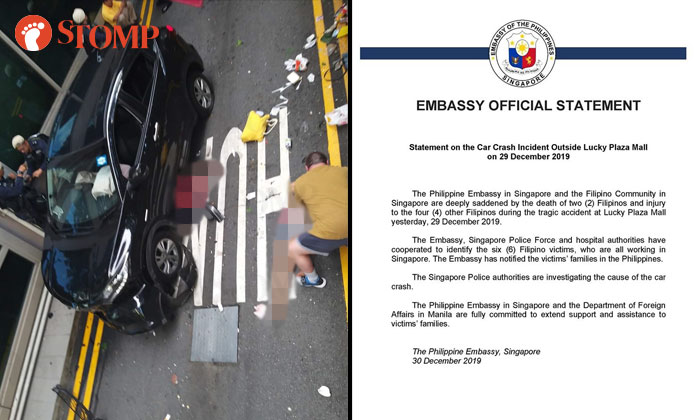 The Philippine Embassy in Singapore has released a statement on the fatal car crash that killed two and injured four others at Lucky Plaza on Sunday (Dec 29).

The embassy said in a statement on their Facebook page that they have cooperated with the police and hospital authorities to identify the six victims, all of whom were Filipino women working in Singapore.

They have also notified the victims' families in the Philippines.

"The Philippine Embassy in Singapore and the Department of Foreign Affairs in Manila are fully committed to extend support and assistance to victims' families," the statement said.

Here is the official statement in full:

According to The Straits Times, two siblings were among the six victims. All of them were close friends.

One of the sisters is dead and the other has been hospitalised.

Mr Yeo Guat Kwant, chairman of the Centre for Domestic Employees, told reporters on Monday that the two women had been working in Singapore for more than 20 years.

A witness said the injured were having a picnic beside the railing when they were hit by the car.

Lucky Plaza mall is known to be popular with foreign workers, especially foreign domestic workers from the Philippines.

The police told Stomp two of the pedestrians, aged 41 and 50, were unconscious when taken to Tan Tock Seng Hospital (TTSH) where they subsequently died from their injuries.

The other four, aged 37 to 56, were conscious when taken to TTSH.

The 64-year-old driver of the car was arrested for dangerous driving causing death.