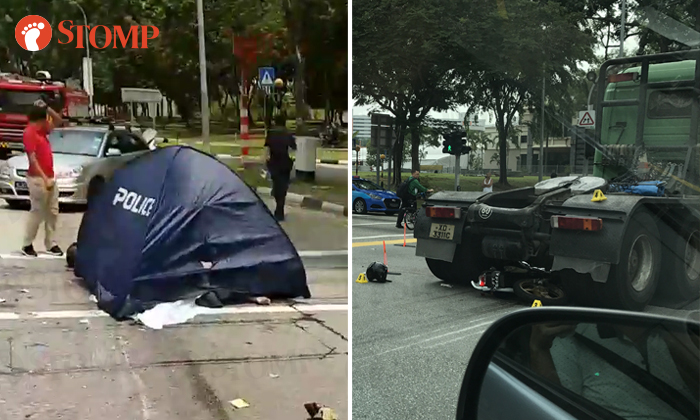 A 20-year-old motorcyclist was killed in an accident at the junction of Jurong West Avenue 2 and Jalan Boon Lay earlier today afternoon (Sep 14).

The Singapore Civil Defence Force (SCDF) told Stomp that it was alerted to the accident at about 1.20pm. Two fire engines, two ambulances, and one support vehicle were dispatched to the scene.

A male motorcyclist was pronounced dead at the scene, said SCDF.

His pillion rider, aged 17, was found trapped underneath a vehicle.

He was extricated by SCDF using hydraulic rescue tools and sent to the National University Hospital (NUH), which was alerted to be on standby to receive him.

Responding to Stomp queries, the police said they were alerted to the incident, which occurred in the direction of Jalan Bahar, at 1.19pm.

The 46-year-old male prime mover driver was subsequently arrested for causing death by a negligent act.

Stompers Bryan and Joshua sent in photos as well as videos from the accident site.

According to Bryan, he saw a motorcycle pinned underneath the truck and two helmets on the road.