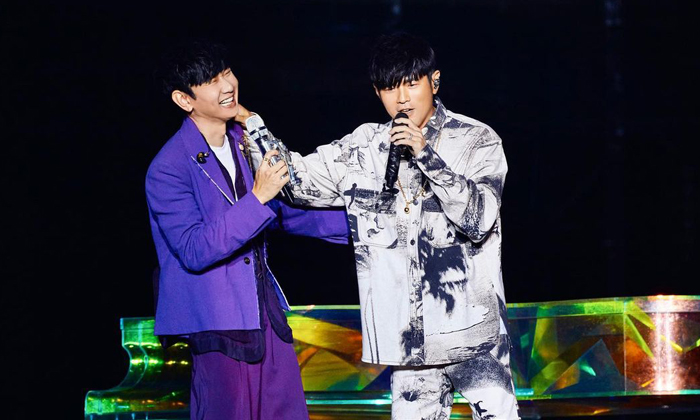 Lin, 41, shared a series of photos on Instagram from the second night of his sold-out JJ20 World Tour, including one with Chou, 43.

In the caption, Lin wrote: “Looks like you guys ain’t afraid of that little bit of rain. Thank you all for being part of my 20 years, may the music live on and grow in your hearts in the coming days.”

He also gave a shout-out to Chou, writing: “Thanks bro @jaychou for being such an amazing guest, a Double J reunion indeed.”

Chou had earlier shared photos and clips on Instagram Stories from backstage while Lin rehearsed in the day.

“The good thing about being here as a guest star is that I can get up close and personal to listen to the Walking CD,” Chou wrote, referring to Lin by his nickname, which came about because of his ability to sing almost any song.

When Chou stepped onto the stage, the full-house of 30,000 fans erupted in screams, as Chou had not staged a concert in two years, since the pandemic scuppered his Carnival World Tour.

He performed his hit song Nunchucks and also sang a few bars of classic Hokkien song Double Pillow especially for Lin’s mum, who was in the audience.

Lin jokingly asked Chou why they had never performed a duet before and they bantered about Chou’s many duets – A Thousand Miles Away (with Fei Yu-ching), Shouldn’t Be (with A-mei), Rooftop (with Landy Wen), and his recent collaboration with Mayday’s lead singer Ashin, Won’t Cry.

Chou then said: “Next time, should we get Ashin to sing with us?”

To that, Lin replied: “Tonight, you perform first. Next time, it will be the three of us”, much to the delight of the audience.