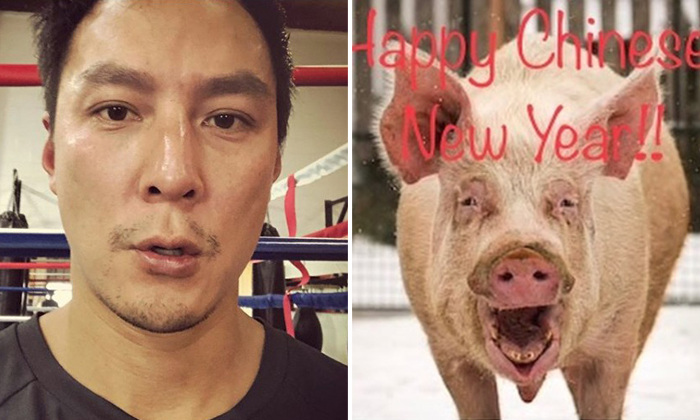 All he probably wanted was to post a cheeky Chinese New Year greeting but yet, it proved to be controversial enough for fans to call him out.

On Wednesday (Feb 6), the 44-year-old American-born Hong Kong actor, director and producer published an Instagram post of a picture of a pig with the words "Happy Chinese New Year!!"

The post was accompanied by a caption that read: "Happy Chinese New Year everyone! May the year of the pig bring you much health and happiness!! Gung Hei Fat Choy! Xin Nian Kuai Le!!!"

However, many fans, seemingly from China, took offence with it because they were unhappy with the image of the pig that was selected.

Under the Chinese culture, pigs traditionally symbolise wealth and prosperity because of its chubby physique, but the pig depicted in Wu's post seemed sickly and unhealthily thin.

Happy Chinese New Year everyone! May the year of the pig bring you much health and happiness!! Gung Hei Fat Choy! Xin Nian Kuai Le!!!

It also didn't help that resourceful fans did a Google search on the term "ugly pig" and discovered that the image used was one of the top results.

While majority of the reactions were in response to the ugly image used, some have also cast aspersions on Wu by questioning if he intentionally posted the image of an unattractive pig.

Conversely, there were fans who rallied to Wu's defence by pointing out that it was clearly a joke and people with fragile egos were getting too easily triggered.

There were even a few who brushed it off because it's his freedom to post whatever he wants.

Regardless, it's probably safe to assume that someone of Chinese descent would not be intentionally disrespectful towards an important festive season.

In fact, if his previous Chinese New Year greeting of a black (the colour black is considered inauspicious during this festival) rooster or his usual Instagram posts are any indication, he seems to have a pattern of posting unflattering photos.

Happy Chinese New Year Ya'll! May the Year of the rooster bring you much health and happiness. #cny #rooster #chicken #lunarnewyear #chinesenewyear