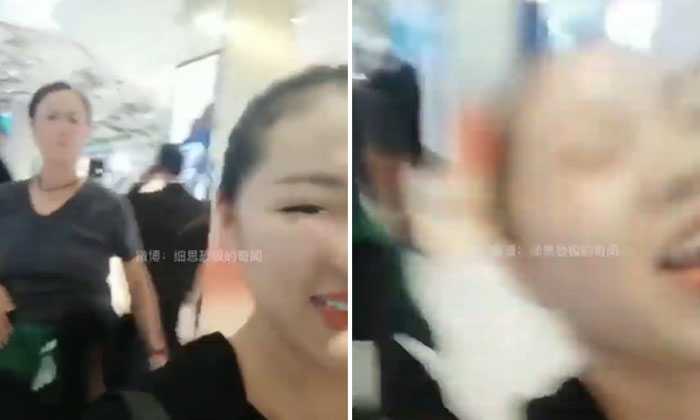 Yes, the girl was kicked by Chinese singer Na Ying.

But supporters of Na point to media reports that said the celebrity's assistant had already warned the girl not to film the artist with her smartphone.

Earlier this week, footage of the incident in Macau was posted on Weibo.

The video shows the girl, with a happy smile, filming Na who is walking behind her.

After Na, 51, who is with another woman, realises that she is being filmed, she can be seen angrily marching up to the girl.

The kick is not captured as the sudden action surprises the girl, making her lose control of her mobile phone's aim.

She is also speechless, unable to respond to Na's question of "why are you filming me?".

According to ETtoday, a friend of the girl has since come out to say that the confrontation left the girl in tears.

The victim, in between sobs, said the kick was not warranted, since she had done nothing harmful and that she is also a Na fan.

She had gone to Macau to support the artist who was featured in a Sing! China concert at the Cotai Arena.

After she was kicked, the girl tore up her ticket for Na's show even though Na apologised to her before she left the scene.

The incident has divided netizens.

While some feel that celebrities should be left alone in public, others lash out at Na for reacting violently.

They said the well-known singer, who has sold more than 10 million albums, should have got used to public scrutiny by now after all these years in show business.

They noted too that the girl was not filming Na doing anything objectionable or embarrassing.

These angry folk also noted, with some satisfaction, that the ultimate loser in this incident is Na, whose image would now get tarnished because of her inability to control her temper in public.

Na is also familiar to many TV viewers as a mentor on talent show Sing! China.

Related Stories
Na Ying posts support for Faye Wong, only to get scolded by netizens
Chris Hemsworth sportingly stops to take selfies with fans at MBS Infinity Pool
Ron Ng gets yanked off stage by fan and shouts: "My hand is about to break off!"
More About:
entertainment
celebrity
singer
China
Na Ying
kick
fan