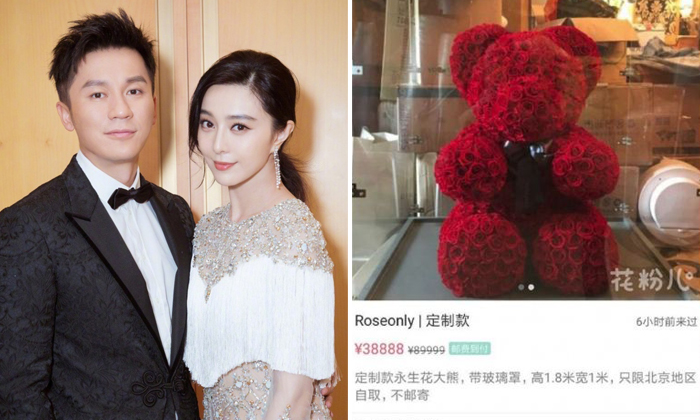 What do you do with the gifts from an ex-boyfriend? For Chinese superstar Fan Bingbing, she might have decided to sell them online.

The 37-year-old actress and her then fiance, actor Li Chen, 40, announced their break-up on Weibo on June 27, but they were spotted dining together three days later, before fans clarified that it was merely a working lunch.

It seems Fan might be seeking a clean break from the actor, as netizens noticed that a huge teddy bear made from preserved roses was put up for sale at an online second-hand shop for 38,888 yuan (S$7,700).

Many packed cartons were seen behind the teddy bear in the photo, with netizens speculating that Li's belongings were being moved out of the house.

However, a check by Hong Kong's Apple Daily showed that while the teddy bear was sold on Fan's online shop, it was listed and sold for only 980 yuan (S$194).

The website did not indicate when the teddy bear was put up for sale or when it was sold, so it is unknown whether it was sold before or after the break-up.

Meanwhile, Li was spotted on variety show Keep Running recently without his ring, as it seems that he and Fan have broken up for good.