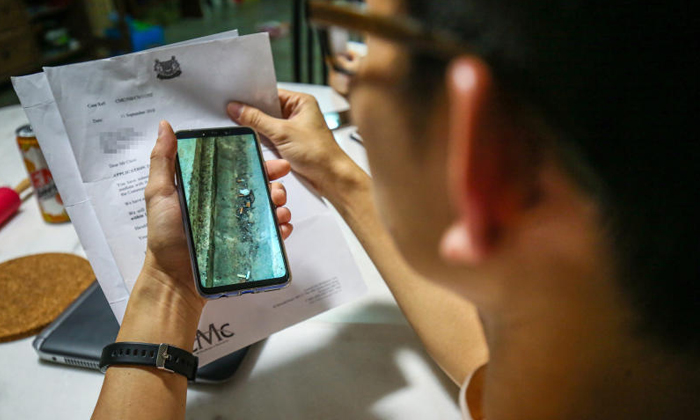 A family of five have been plagued by second-hand cigarette smoke from their neighbours at Block 232 Tampines Street 21 despite multiple complaints.

Mr Zhu, a 39-year-old project manager, told Lianhe Wanbao that he and his family are deeply troubled by the smell of smoke from his neighbours on the upper floor.

Despite repeated complaints, there has been no change in the situation and he is worried about the health of his young children.

According to Mr Zhu, one of the units upstairs is owned by a Burmese who is often out of town for long periods of time. The unit has always been rented out to foreigners.

He said: "We started smelling smoke when a new group of tenants moved into the unit last August."

Mr Zhu added that the smoke smell initially came in from the kitchen window. After he complained to the Burmese flat owner, the odour came in from a gap in the front door.

"Their landlord forbade them from smoking in the flat, so they do it along the corridor," he explained.

Meanwhile, Mrs Zhu recounted seeing one tenant smoking in the corridor outside the lift, even throwing away the cigarette butt and empty cigarette packet into a bicycle basket.

"My three kids are aged two, five and six. They are still young and inhaling second-hand smoke long-term will affect their health," added Mrs Zhu.

According to Mr Zhu, there are four men in the unit upstairs who smoke.

At times, he can smell smoke in the early morning as well as in the wee hours of the night.

Mr Zhu said: "I have tried talking to them and have also complained to several agencies. The situation improved slightly in January this year, but went back to square one after two months."

His neighbour, Mr Chen, also confirmed with reporters that he could smell from cigarette smoke from time to time.

The 55-year-old factory worker said: "I don't dare to open the door and can only turn on the air-conditioner, because I have to inhale second-hand smoke if I open the windows."

On Sunday (May 12), three of the tenants were photographed smoking at the foot of the block.

See the gallery for more photos.