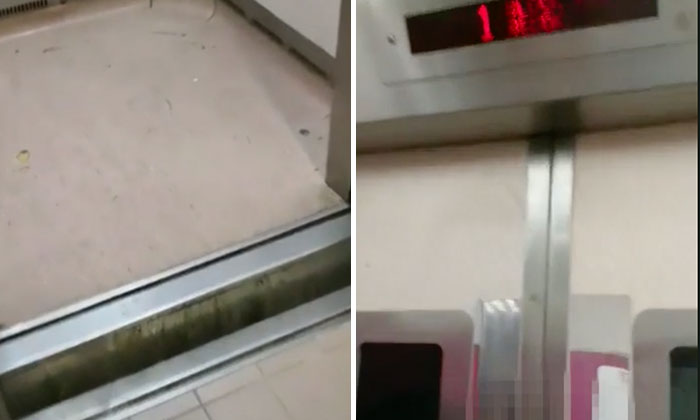 A family of four were left traumatised after a lift they were in suddenly surged upwards, overshot the designated floor and went to the 14th floor, before descending back to the ground floor, and then ascending to the 14th floor again -- despite the display showing it was on the 9th storey.

The incident happened at Lift Lobby B of Block 670 Jalan Damai, at about 8.30pm on May 6, reports Lianhe Wanbao.

There are two lifts in the block.

Mr Hong, 50, who has lived at the block for 20 years, said he that he along with his 50-year-old wife, 19-year-old daughter and 18-year-old son were returning home at the time of the incident, and boarded the lift at Lobby B.

The lift did not stop at the designated floor but continued to ascend.

“It went to the 14th floor, but the doors did not open. Then it started going down again.

“I quickly pressed the buttons for every floor on the control panel, hoping that then lift would stop.

“My children became frightened and kept asking me why the doors wouldn’t open.

“My wife consoled them, saying that the doors would open once we reach the ground floor.”

However, when the lift finally reached the ground floor, it ascended again, even more rapidly than usual.

Mr Hong said that he and his family were at a loss.

They held each others' hands and braced for impact in the event should the lift suddenly descend.

It was then the lift finally came to a stop.

Mr Hong vividly recalled that the lift display showed the 9th floor, but when the family alighted, they found themselves on the 14th floor instead.

“When I stepped out from the lift, I felt like we just escaped the gates of hell!”

After reaching home, Mr Hong immediately called the town council and was told that technicians would be dispatched to do an inspection on the lift.

The lift would stop operating temporarily.

Mrs Hong also placed a notice outside the lift advising other residents not to use the faulty lift.

In response to media queries, a spokesman for Aljunied-Hougang Town Council confirmed that the lift had malfunctioned, and operation of the lift at Lobby B was suspended on May 6 for the safety of the residents.

It also tasked its contractors to determine the cause of the malfunction.

The spokesman also added that the town council understood that the inconvenience it would pose for residents, and had worked with contractors to ensure that the lift at Lobby B resumed operation as soon as possible.

According to the spokesman, the lifts resumed operations on May 8, and the town council will continue to monitor the situation.