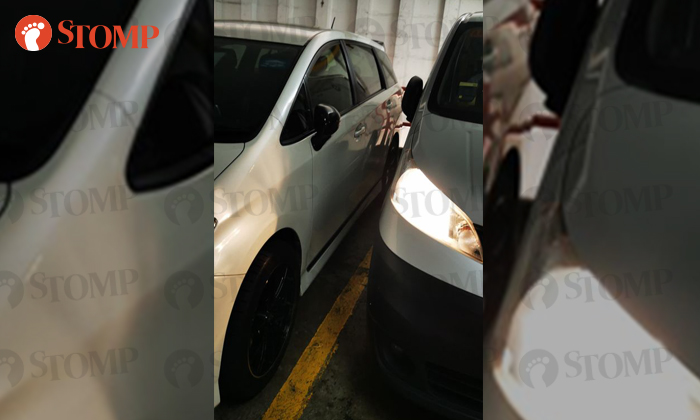 A poorly parked car blocked Stomper Ting and her family's access to their own vehicle, leaving them stranded in the carpark for almost 30 minutes.

The incident occurred in the carpark at People's Park Complex on Sep 19, at around 1.45pm.

Stomper Ting, who was with her husband and child at the time of the incident, shared photos showing how they were unable to access their own vehicle because another car was parked too closely to it.

Ting said: "We were unable to open our car door and were stranded for almost 30 minutes because of this selfish driver.

"In the end, my husband had to climb over from the passenger's seat to the driver's seat and nearly hurt himself in the process.

"There was nobody around to ask for help and if I wanted to ask the security guard, I would have to go very far.

"I felt very upset and worried during the incident as I had a kid with me and I am not a driver."

Related Stories
Resident angry with car constantly blocking her mother's gate: 'I can only go in or out if I'm Ant-Man'
Woman parks Audi at Tampines void deck, says that's what the ramp is for
Oops! Audi gets wheel clamped and $100 fine at Republic Poly
More About:
fail
carpark
parking
inconsiderate