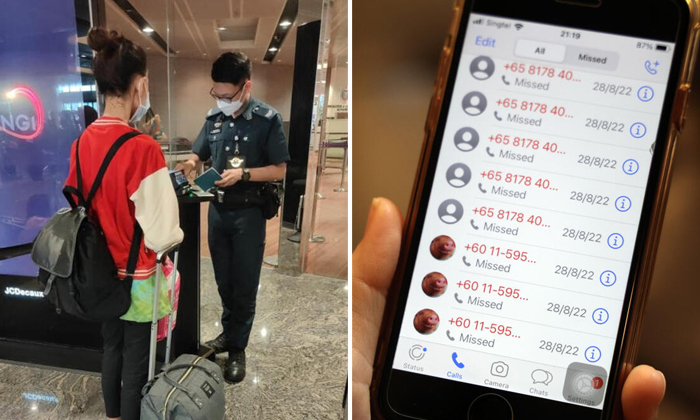 After receiving up to 100 threatening text messages and phone calls, they started to have men coming to their doorstep to harass them.

One family recently found themselves hounded and harassed – all because their domestic helper borrowed money from illegal moneylenders.

Speaking to Shin Min Daily News, a woman who went by her surname Huang, said it all started when she received a string of WhatsApp messages from an unknown number on Aug 28.

The texts indicated that their maid owed them $1,000. Photos of the Indonesian woman holding her work permit were also sent to Huang.

"I'd yet to regain my senses when the person suddenly called me. The moment I picked up, he shouted and asked if I knew that my maid owed them money."

When questioned, Huang's maid admitted to borrowing $1,000 from the illegal moneylenders after seeing their advertisement online.

The domestic helper claimed, however, that the cash was not transferred to her Singtel Dash e-wallet as promised.

"I told the person on the phone that I would return the money immediately when it comes in, but he told me that if I were to pay the following day, there would be an additional weekly interest of $300 factored in," said Huang, a 57-year-old accountant.

"He wanted me to pay my maid's debt and threatened to harass me and my neighbours.”

Huang said she tried to negotiate with the man for 30 minutes, but to no avail.

"I hung up and called the police, after which I blocked his number," she said.

What followed, however, was a barrage of a hundred phone calls and texts. The numbers appeared to be from overseas, including Malaysia and Philippines.

"They even sent me videos which depicted arson, paint-splashing, assault and other acts of harassment to scare me."

In texts that were shown to Shin Min, the person threatened to splash paint on Huang's neighbours' Mercedes cars, and then write her name and phone number on it.

The text continued, "let's see who has more to lose".

SHOWED UP AT THE FLAT

Huang's husband said that on Aug 31, a loan shark runner turned up at their doorstep.

When the 62-year-old retiree answered the door, the man thrusted a mobile phone at him and said: "someone wants to talk to you".

"The Ah Long (money lender) on the line asked when I was going to pay up. The runner took off when I tried to take a photo of him."

Following that, Huang said she received texts containing her husband's photo. The caller's profile picture was also changed to that of her husband.

Fed up, the family installed nine new CCTV cameras around their property, spending more than $1,500 in total.

Huang told Shin Min that the maid was sent back to Indonesia on Sept 2.

She had been working for her for more than a year and had a monthly salary of $650.

"She always claimed that her family needed the money to build a house, or for renovation. Then her mother died and she said her children needed money to go to school," said Huang.

"But I didn't think that she would borrow from loan sharks."

Eventually, Huang discovered the maid had borrowed from six illegal moneylenders in total – in an attempt to "borrow from one to pay the other".

She said the maid has yet to repay $550 owed to her, but she doesn't intend to pursue the matter.

"Now what worries me most is my family's safety," Huang said, expressing her fear that the loan sharks may not stop their activities even though the maid is no longer in Singapore.

"These loan sharks know that maids often are unable to repay the debt, and they'll target the employers instead."