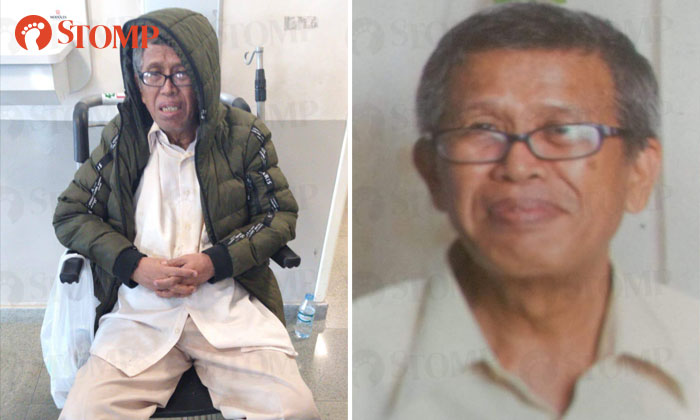 The family of 69-year-old Mr Syed Hussain Bin Syed Agil Alsagoof have been distraught over his wellbeing ever since he went missing in Istanbul, Turkey since March.

Mr Syed Hussain's nephew, Haro Angelo, informed Stomp that his uncle was scheduled to fly to Istanbul with agency Hamidah Travel on Mar 13 on Turkish Airlines.

However, after checking in at Changi Airport and before he was about to board the plane, he could not find his passport.

The plane took off without him and he was escorted out of the boarding gate to the departure hall by Turkish Airline personnel.

"Unknown to anybody, he purchased a flight to Dubai via Emirates airline after finding his passport again," said Haro.

"From Dubai, it seems he purchased a flight to Istanbul with Fly Dubai.

"According to records provided by the Embassy of Singapore in Ankara, Turkey, my uncle arrived at Sabiha Gokcen International Airport in Istanbul on Mar 14 on flight EK 2226."

"According to records provided by the Embassy of Singapore, he was last seen at Sultangazi Haseki Hospital on Mar 16."

Haro shared a photo of his uncle sitting in a wheelchair at the hospital.

Unfortunately, no one has heard from or seen Mr Syed Hussain since then.

Hamidah Travel said in a Facebook post on Mar 31 that it has since alerted the Ministry of Foreign Affairs (MFA) to the situation.

It also made a police report after being unable to locate Mr Syed Hussain.

Apart from alerting the police, MFA, and Singapore Embassy in Turkey, Hamidah Travel also got their land operator in Istanbul to find Mr Syed Hussain at the airport.

It said: "But after checking around at Sabiha Cokcen Airport and get assist from Information Counter and Airport Police counter Mr Syed Hussien is nowhere to be found and he did not make any report according to the airport information and airport police post.

"We did a check at every [hotel] that the group [checked in at] in any case Mr Syed proceed directly to the hotel.

"But also no details was found."

It said it is in touch with Mr Syed Hussain's family and are still checking and investigating the incident.

Haro said his uncle's siblings are extremely worried and have been crying every day thinking of him.

He added no one is sleeping well thinking about his condition.

"Furthermore, Muslim fasting month Ramadan is here and it will be [a] sad moment for family members to go thought this month without my uncle," he said.

He is appealing for others to share this information so that someone can give any information on his uncle's whereabouts.