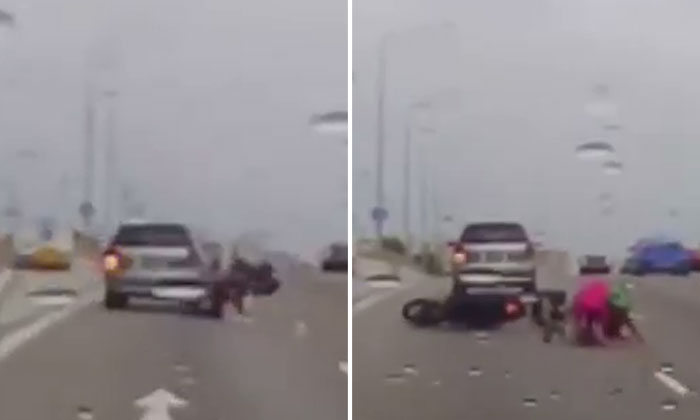 A family is appealing for witnesses after a Foodpanda delivery rider was involved in an alleged hit-and-run accident along the Central Expressway (CTE) on Sunday (Sep 13).

A Stomper alerted Stomp to the appeal that was posted with a video on ROADS.sg's Facebook page.

According to the post, the incident happened at about 12.20pm on Sunday on the CTE towards the city.

In the video, a car is seen making a late decision to exit the expressway.

However, the driver appears to change his mind after crossing the chevron markings and ends up hitting the motorcyclist while getting back onto the CTE.

The rider falls to the ground as the car continues travelling along the expressway.

He is later seen limping back to his fallen motorcycle.

The rider's father is looking for anyone who witnessed the accident and has the car's licence plate number.

Related Stories
Pedestrian using phone taken to hospital after getting knocked down by van along Sophia Road
Car ends up in drain after accident near Commonwealth MRT station
Woman thanks Gojek driver for 'saving the day' after accident with lorry that left her car wrecked
More About:
accident
hit-and-run
appeal for witnesses
food delivery
foodpanda
motorcyclist