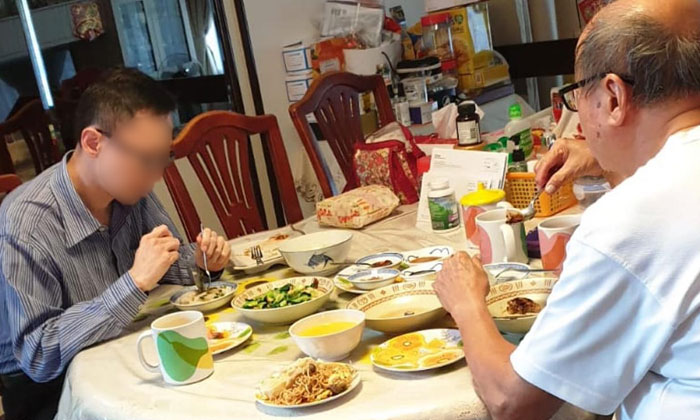 A man and his family are appealing for help in 'talking some sense' into an outsider who allegedly insists on visiting his elderly parents at home despite circuit breaker measures.

He wrote that the man, named CK, had accepted an invitation from his 81-year-old father to their home for a meal on Apr 10.

According to Alvin, CK arrived without wearing a mask and apparently ignored their advice when they tried to convince him not to come to his parent's home.

"As a concerned son, I called the police and he was issued with a warning."

Alvin said his dad, a retired businessman, had suffered a major head injury two years ago and his mother is 75 years old and has diabetes.

This puts them at a higher risk of getting a severe infection amidst the ongoing Covid-19 pandemic.

Alvin said despite the police warning, his dad is still adamant in meeting CK.

"I have little control over his actions as he is at an age where he does not seem to respond to reason or logic," said Alvin.

"Therefore I would like to make a plea to CK to reject any invitation from Dad to go out or to my parents' house and therefore run the risk of breaking the law again."

He said he does not know the circumstances of how his father and CK met but it happened two years ago.

He wrote that his father is generous and gives CK free groceries, meals, chauffeured car rides and takes him on outings.

He was initially supportive of their friendship but feels his father has 'changed' ever since meeting CK.

"I do not know what has happened but Dad is willing to threaten his wife of 50 years with a divorce and forgo relationships with his biological children and grandchildren in defence of CK," he said.

He added everything changed when his father "disowned" him in retaliation for calling the police on their illegal lunch gathering.

Describing himself as concerned and heartbroken, Alvin said he does not will any ill on CK but is appealing to anyone who may know him to convince him not to meet up with his father.

"My responsibility is for the safety of my parents and my only wish is for them to enjoy their twilight years in health, peace and happiness in an “unbroken” family," he said.

According to Lianhe Wanbao, CK is the elderly man's godson.

He is 44 years old and an administrative clerk.

CK shared his side of the story and said Alvin's father had repeatedly invited him over and assured him that his wife would not say anything.

He did not expect to get scolded the moment he arrived and for the police to show up.

CK told Wanbao: "Actually, I have rejected his invitation many times but he insisted that I come over. If I had known, I would have just chatted with him on the phone."

CK also said that he is aware of how his godfather's family feels about him and how they suspect him of having ulterior motives.

However, he said he has never accepted his godfather's money except for red packets during Chinese New Year and daily necessities.

Related Stories
Man and wife get warning letter for visiting his mum in Jurong West -- after he calls police for family dispute
FB user posts about 'having illegal gathering, so what?' after social gathering ban announced
Man fined $300 for chatting with friend at bubble tea store without safe-distancing, debunks fake news
More About:
facebook
illegal
inappropriate
Covid-19