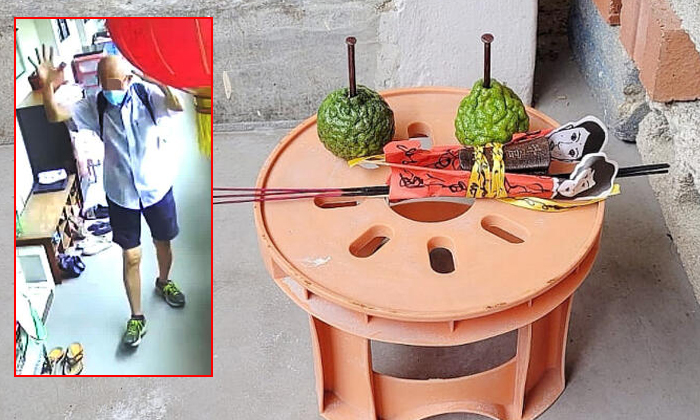 A longstanding dispute between two families in Ang Mo Kio has escalated with the appearance of a bizarre-looking altar along the corridor.

According to Shin Min Daily News, the makeshift altar is on a stool placed outside a third-floor unit at Block 71 Ang Mo Kio Avenue 3.

On the stool are two paper figurines placed together with a small coffin and joss sticks, bound together by a strip of yellow paper, as well as two fruits pierced with iron nails.

Mdm Ho, a 60-year-old resident, said she first noticed the altar along the corridor on November 14. Although puzzled, she did not question her neighbours.

However, she later realised that the setup might have been a black magic curse after her son-in-law enquired about it at a temple, leaving her spooked.

Mdm Ho said: "I've had no issues with my neighbours ever since moving here eight years ago. They pray at their doorstep, often accompanied by chanting and the ringing of bells.

"Although I felt uncomfortable, I did not say anything, However, setting up the altar is simply too much."

Mdm Ho reported the matter to the police and the town council. But due to its religious nature, the situation has yet to be resolved.

Reporters who visited the scene on Saturday (Nov 27) saw incense altars and flowers at the doorstep of the unit in question.

They also spoke to a couple residing in the flat, who said that the altar was a religious ritual for praying and not a curse.

The couple, who have been staying at the block for 30 years, claimed that Mdm Ho and her family have been finding fault with them ever since moving in.

"They complained when we placed a shoe rack outside our door. They also placed boards above the shoe rack to put a lot of potted plants and even installed CCTV cameras at the doorstep," the couple added.

Both parties also accused each other of other petty acts.

Mdm Ho said that she used to greet her neighbours regularly when they first moved in.

However, their relationship went downhill after the couple placed a cabinet at their door and used a small bowl to catch water, which resulted in mosquitoes breeding.

Meanwhile, the couple alleged that Mdm Ho's family hung socks on a fan and made it blow in the direction of their incense last year, thus causing a safety hazard.

They also said that Mdm Ho's husband would provoke them by making a praying gesture at their doorstep when he came home (see photo inset above).

"We have a clear conscience," the couple added.

When Mdm Ho's family posted about the altar on Facebook, many netizens were quick to speculate that the bizarre setup was a form of black magic.

However, a fengshui master whom Shin Min contacted said that coffin and paper figurines are typically used to seek wealth.

He shared: "According to the perspective of fengshui, a curse would not be so obvious. But this method of trying to attract wealth is not a common sight either."