Fake news alert: Temperature in Singapore to soar to 40 deg C due to weather phenomenon 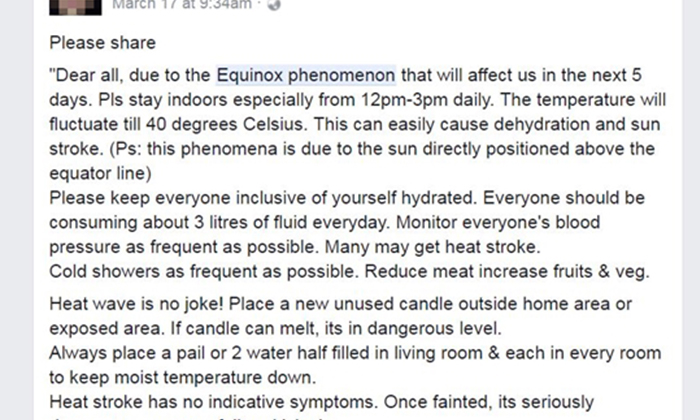 A message circulating on Facebook, which tells of temperature in Singapore rising as high as 40 degree Celsius due to a weather phenomenon termed ‘equinox phenomenon’, has been proven fake.

The message had claimed that the phenomenon would hit Singapore in the coming five days, and advised people to drink more water and stay indoors, especially during the period between 12pm and 3pm to prevent heatstroke, reports Lianhe Zaobao.

A spokesperson from Meteorological Service Singapore (MSS) told reporters that the National Environment Agency (NEA) is aware of the message but has expressed that it was in no way true.

The MSS also said that Singapore is currently experiencing a period of inter-monsoon, during which it would experience higher temperatures and periodic rain, usually during noons or evenings.

The approaching of spring would also contribute to higher temperatures.

However, the increase should not be drastic, and a notice by the MSS last Thursday (Mar 16), has clarified that in the later half of March, the highest temperature would be between 33 to 34 degree Celsius, or even 35, but would not reach the 40 degrees Celsius as claimed by the message.

In addition, in a short span of five to seven days, Singapore would also experience thunderstorms, usually during the afternoons which could also extend into the evenings.