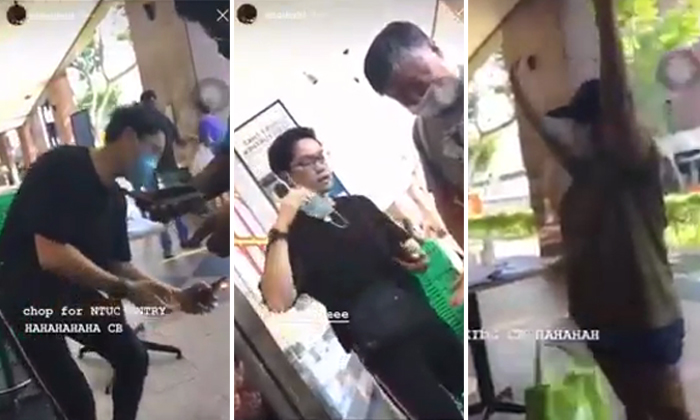 The incident occurred at FairPrice's Orchard Grand Court in the late afternoon on April 29, a FairPrice spokesman told Stomp.

A video of the incident was posted on Facebook and shows one of the part-time employees pranking patrons while being filmed by his accomplice.

The 18-second video appears to be a series of clips originally posted on Instagram Stories.

A Stomper, who alerted Stomp to the incident, alleged that the employee in the video had "ownself posted on his IG Story" but deleted it afterwards.

In the video, the employee can be seen looking for a "chop" on a shopper's hand with the flashlight from a mobile phone and saying, "Eh, don't have leh. Why ah?'

The employee then shines his flashlight on other parts of the shopper's body and pretends to look for the non-existent chop, before collapsing into laughter.

His accomplice can also be heard giggling and laughing.

In another clip, the employee can be seen with a face mask hanging from one ear.

He is also subsequently seen getting a female patron to raise both her arms.

Responding to queries by Stomp, a FairPrice spokesman said it is "aware of a video circulating online on the unprofessional conduct of a person while performing temperature taking duties at the entrance of one of our stores."

The spokesman said that FairPrice takes a serious view of the matter and has since "relieved both the part-time staff in question and the other who was filming the video of their duties."

"A police report has also been filed on this matter as this concerns public safety in view of the current Covid-19 situation and their conduct has caused considerable public alarm and concern," added the spokesman.

"We also take the opportunity to assure customers that FairPrice will continue to safeguard their safety and well-being within our stores and will not hesitate to take firm actions against unprofessional conduct or any breach of our strict safety protocols."

This incident comes after two teenagers were arrested in April for filming themselves 'sampling' drinks at a FairPrice supermarket and returning the products to the shelf.

The two 17-year-old boys, who had captioned the video "How to spread Wuhan", were subsequently each charged with one count of being a public nuisance.

Separately, police are also looking into an incident in which a temporary staff member allegedly took photos of female shoppers during temperature screening duties at Cold Storage in The Rail Mall and circulated the images in group chats.

Related Stories
Two teens charged after one allegedly placed juice he drank back on FairPrice shelf
2 youths arrested for 'sampling' drinks at FairPrice and returning them to shelf, posting video online
FairPrice urges public not to circulate video of youth 'sampling' drinks and putting them back on shelf
More About:
Youths behaving badly
FairPrice
Covid-19