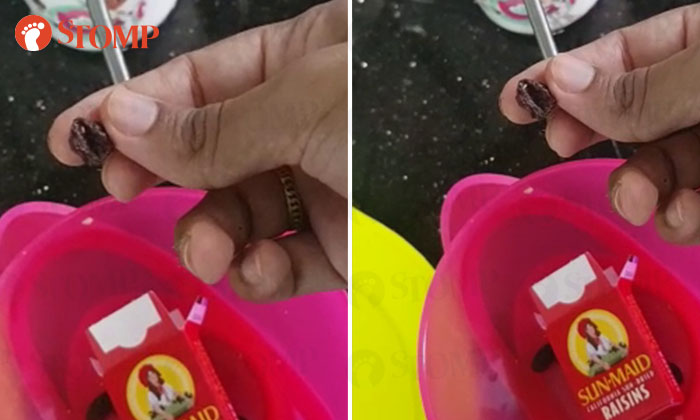 A supermarket chain, NTUC FairPrice, is investigating an incident where a customer had found some insects in a packet of raisins.

Stomper Yasmin noticed her 22-month-old daughter spitting the raisins out after snacking on them on Sunday (July 14).

She had purchased the affected Sun-Maid raisins from a FairPrice supermarket at Block 63, 66 Yung Kuang Road.

Yasmin told Stomp that when she checked on the raisins, she saw some insects that "looked like fruit flies and worms".

She also shared with Stomp videos of what she saw.

In the video, an insect that looks like a worm can be seen moving on the raisin Yasmin is holding.

A black insect can also be seen moving in a bowl of raisins in the video.

Yasmin said: "The insects looked like fruit flies that appear in rotten food. I was shocked and disgusted by it.

"I was horrified and worried about my child. She already had half of the packet.

"I gave my daughter some raisins on Saturday (July 13) as well but I didn't notice anything.

"I have been observing her and noticed no signs of discomfort so far."

"We have not received any enquiry regarding this alleged incident on the product in question and preliminary checks on existing batches did not reveal any abnormalities.

"We invite the Stomp reader to contact us directly at our Customer Relations Hotline at 6552 2722 or at general.feedback@fairprice.com.sg to help in our investigation on this matter and as well as to render timely assistance."